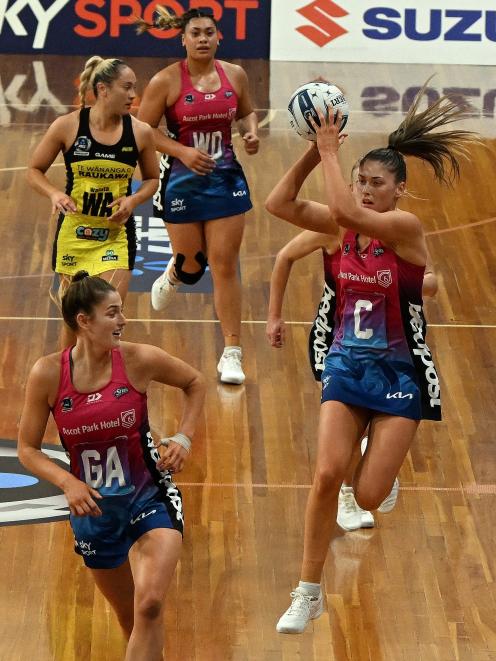 This time, though, the roles were reversed.

The Southern Steel led for three quarters, before falling to a late comeback at the Edgar Centre last night.

A seven-goal run — part of an 11-2 start to the fourth quarter — proved the team’s undoing, as the Central Pulse disrupted the attack and shredded the defence.

That enabled the visiting side to pull away, condemning the Steel to a 50-44 defeat.

It was a contrast to the last meeting of the teams, in which the Steel mounted a mammoth comeback to snatch a late win.

The Steel scored just five goals in the fourth quarter, as the Pulse defence lifted and the Steel attack faltered.

The home team was unable to find its shooters — the long arms of Kelly Jury proving difficult to navigate — and it took just eight shots to the Pulse’s 16 in that final quarter.

Notably it was forced into replacing George Fisher following a controversial caution with seven minutes to play.

It was a huge momentum swing and, as the Steel saw from the other side in the last meeting of the two teams, that is a hard thing to reverse.

"[Momentum] really is a tough thing to get back," Steel coach Reinga Bloxham said.

"You could see the Pulse had it right from the start [of the fourth quarter]. We lost our first centre pass and away they went.

"When you’re in it like that something has to change. It wasn’t for a lack of effort, or a lack of a want to do it.

"Our connections just weren’t quite there. George Fisher was struggling in the circle there and then she got a caution, so we had to change something.

"I thought they did a really good job of putting us under pressure there."

Bloxham did not think lingering Covid-19 fatigue from the team’s recent outbreak was a reason for the collapse.

She simply felt the team had not coped well with the Pulse’s late lift in intensity.

"I think lots of things happened in that fourth quarter, to be honest, and we didn’t adapt.

"We were probably left wondering how we’d change things. It hurts when you have a lead and you go into that last quarter and nothing seems to work. It was tough.

"I thought they threw absolutely everything at us physically and we just didn’t cope with that.

"We didn’t make very good decisions under that pressure."

Prior to that, all had been going well and Bloxham admitted while there were plenty of positives in that game, it would be hard to see them after the fourth quarter.

Kate Burley was a menace in the defensive circle, plucking several intercepts out of the air and giving the Steel plenty of ball to work with.

It led 18-13 after an impressive first quarter in which the attack looked connected and the team operated efficiently.

That lead all but evaporated early in the second quarter, the Pulse drawing back to within one as the Steel attack faltered.

However, the Steel did well to remain in touch.

Burley was influential in that, while the hard-working Renee Savai’ianaea made it tough for the Pulse to find its shooters.

That enabled it to weather the storm and, while scoring just nine goals in the quarter, it remained ahead 27-23 at halftime.

It was a lead that did not look like disappearing as the Steel looked to remain in control through the third quarter.

At that point, the momentum swung and the Steel was unable to find its shooters.

The Pulse, on the other hand, was clinical and Aliyah Dunn was her usual accurate self, making 36 of her 37 shots to guide her team to victory.