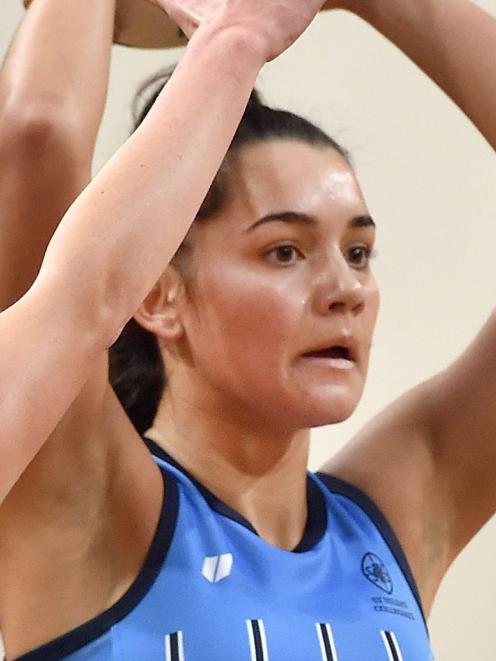 Gemma Rowcroft
Phys Ed C secured its second win in the Dunedin premier A competition this season, beating St Hilda’s 53-34 at the Edgar Centre on Saturday.

Both teams had one win each heading into the game after playing three round-robin matches in their pools.

On Saturday, the pools crossed over for the first time.

Phys Ed had a narrow three-goal lead heading into the third quarter after a relatively close first half.

The third period was the turning point in the game,
as Phys Ed created a 10-goal lead thanks to some slick attacking play and winning possession on defence.

Goal keep Laura Balmer picked up lots of rebounds, defections and intercepts throughout the game which her team capitalised on.

Down the other end, shooters Tessa Bekkers and Ella Harrex combined well in the circle.

Often, Bekker would hold space under the hoop while Harrex presented at the top of the circle.

The team outscored St Hilda’s 15-8 in that quarter, at one point landing six in a row.

Defensively, it forced a few held balls and made St Hilda’s attackers pass the ball around in their attacking third.

The final 19-goal difference did not look likely at the start of the game as teams took a while to settle.

Phys Ed was the first to get ahead by three goals after it rebounded a St Hilda’s missed shot.

The school team then scored three of its own to level the scores.

Wing attack Gemma Rowcroft was quick off the line at the centre pass and drove well to the circle edge.

She moved to centre for the middle two quarters and switched back to wing attack later on.

Her speed and ball movement were highlighted when she shifted back down the court.

She paired well with shooter Ella Southby, who had stints at goal attack and goal shoot.

St Hilda’s showed promise throughout the game but could not keep up with Phys Ed in the second half.

Both teams will remain in premier A for round two.

Taieri beat South Pac 45-43 on Saturday to finish seventh in premier A.

That means South Pac will play the top-seeded premier B team, Columba College Senior A, while Taieri will play second-placed College Red.