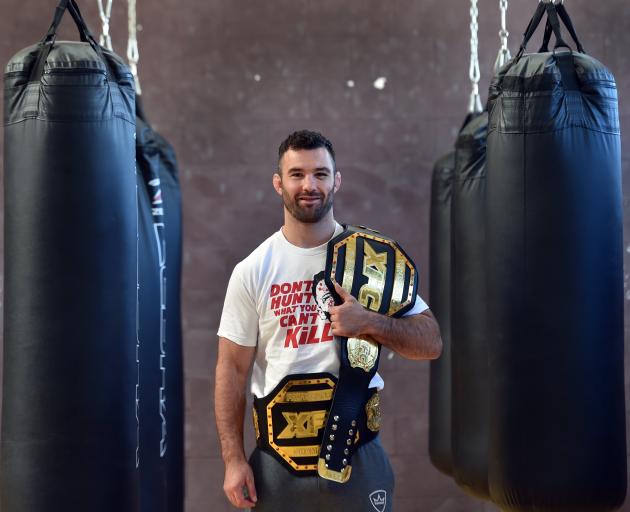 Reaching the Ultimate Fighting Championship is no longer just a dream for Brogan Anderson.

Fresh off a sixth consecutive win, the Dunedin MMA fighter has his sights firmly set on making the jump to the sport’s elite competition.

Anderson beat Pane Haraki at the Edgar Centre last weekend, claiming the XFC’s light heavyweight title to go with the middleweight one he already held.

It lifted his record to 15-3 and further cemented his current goal.

"At the moment it’s kind of just about getting my name in front of the right people," the 32-year-old said of his UFC ambitions.

"My record at the moment speaks for itself. I’m on a six-fight winning streak, I’m the No 1 ranked middleweight in Australasia and probably the No 1 ranked light heavyweight, once they update the rankings.

"Now, it’s just about making some noise online, getting my name in front of the right people. Hopefully, sooner rather than later the opportunity will come up and I’ll be in there."

While he fought at light heavyweight last week, Anderson believed his future remained  in the middleweight division.

Despite that, he was open to taking light heavyweight challenges.

Anderson still spends a lot of time in Dunedin, but splits it with regular stints training at Auckland’s City Kickboxing gym.

That is the gym which produced talents such as Israel Adesanya and Dan Hooker, both of whom are now among the UFC’s top fighters.

It also meant Anderson was training with people who could help him get his foot in the door.

He said the gym had a great team culture that he was enjoying being part of.

That was helping prepare him for a step up in competition, but it was one he felt he was ready for.

"There’s a lot of guys in the UFC that are absolute killers.

"But then there’s guys in the UFC that I know I can definitely beat. It’s definitely a step up. It’s the premier league in the world, so all the best fighters in the world are fighting in the UFC. I’m more than ready for a step up in competition."

A stint in the United States was not out of the question either.

Anderson said he had been considering a move to make himself more accessible to the UFC, although was still weighing up his options.