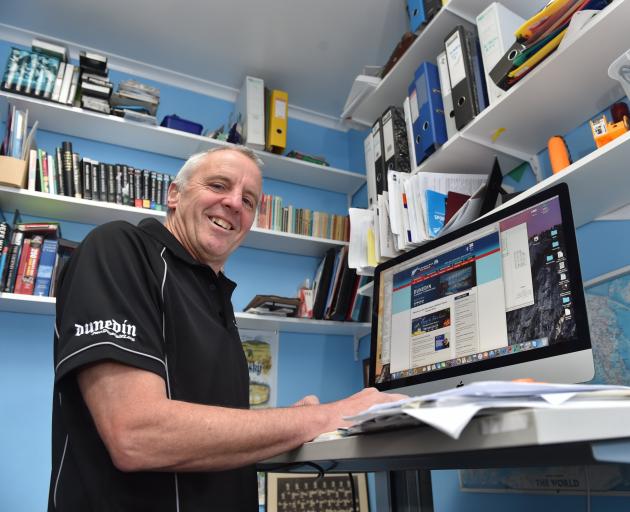 Geoff Simons processes some Masters Games results for the 2016 event. Photo: Peter McIntosh
In a short series, the Otago Daily Times talks to those people who work behind the scenes to keep sport going. Steve Hepburn talks to Geoff Simons, who works on and off the field in different sports.

Geoff Simons jokes he never got past the Octagon in his schooling.

But his influence has been felt far and wide in Otago in grass roots sport.

He now works at the Otago Polytechnic but work surely must get in the way of his other pursuits.

Simons is a busy man. He does all the secondary school rugby draws. He is heavily involved in the Roslyn Bowling Club. He manages the women's side at the Alhambra-Union Rugby Football Club, along with doing a lot of other work around the club.

He co-ordinates all the results at the New Zealand Masters Games in Dunedin and compiles the draws for bowls in Dunedin. When he has time he referees rugby at the younger age grade level and for a good measure he also organises a couple of junior rugby tournaments which have more than doubled in size since they started.

Simons' paths to his many roles all have a story but they all relate to wanting to do something for the community and keeping the sport alive.

''I suppose it comes back from my mother. It has a lot to do with the community and having that connection and having a sense of belonging. Just to be able to be together and be able to get something from other people,'' Simons said.

''You only get out of it what you put in. But you just want to help out, work on things which help things out. I have just started to look at the 150-year anniversary for the Alhambra-Union club, looking at a few photos and stats. You just do what needs to be done.''

Simons got involved in women's rugby through family.

''My daughter [Kate] was playing at Otago Girls' and they would only get half a season of games. So it went from there. Then I got a rugby girls festival going up in Oamaru in 2001.''

Simons said to him organising festivals and helping out was what sport was about. He was a fan of everyone getting a go and getting people to enjoy the game regardless of the score.

''Participation is so important. You have got to have your top level. We know that. But rugby is a gladiatorial sport where only the strong survive. But surely there should be a place for an 18-year-old who leaves school and just wants to play.

''At our tournament we were using the elvs [experimental law variations] before they had been used. At the tournament when the score gets too big we have scrums on the 22m line instead of kick-offs to help the team which is behind. Of course you have to have a winner and a loser and some teams are not going to win all the time.

''But it is about balancing it up. Next year I am looking at having two try lines for the tournament. One 2m back from the first tryline, where if you score you get seven points straight away. I just think it will encourage a bit more running rugby. Get away from all those pick and goes and bashing it across the line.''

A South Island under-15 rugby tournament he started in 1987 began with 12 teams and now had 27 and was played in various towns.

Sport had changed greatly in his time but change was a constant.

''When Alhambra and Union joined we had like eight to 10 senior teams playing. They each got half the ground at the North Ground to practise for an hour and that was it.

''Things have changed, though. The whole world has. Sports have to be now really good at being flexible. Things are now really easy to do. People just never went to Sydney for the weekend. Never went anywhere. Now you have to work round that.

''You might be selecting a team and say you have 18 weeks of play. But you might have someone who can only play 12 of those 18 weeks. So you have to pick bigger teams and work out who can play where.

''It's hard though. People don't remember things like they used to. Just send an email but they never read it.

''It's like getting volunteers for a club. People are scared to commit. They get daunted by things like health and safety but a lot of it is common sense.''

People are a lot more time poor these days but Simons said being organised was a key.

A degree in mathematics helps in doing his draws.

''Some people would find it hard and then you have all the variables of secondary schools and travel. So you don't want to have a team from Mount Aspiring College playing away four weeks in a row. But you need all the information in front of you before you start. I don't want to hear from them about a game halfway through the week.''

Simons says his refereeing would never win him accolades from the officials but that did not worry him.

''I'm not a great follower of the laws. It is about man management. I do not get too tied up in technical aspects so much. If both teams can come off having scored five or six tries and everyone is happy then that is fine. You do not want the laws taking over the game. You just want to be fair.''