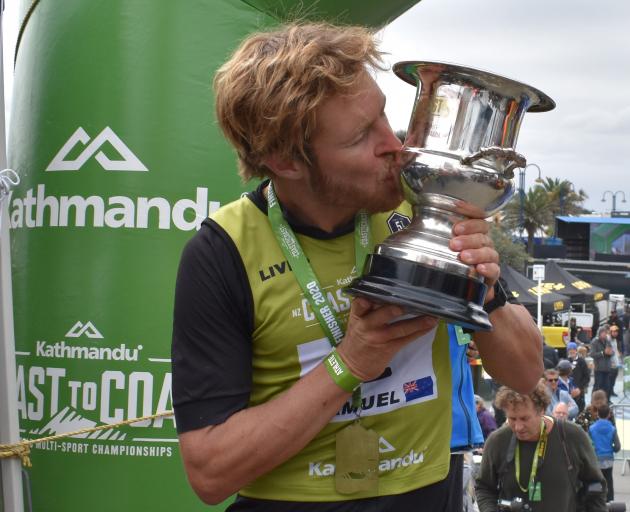 Sam Clark (Whakatane) kisses the world cup of multisport after winning the 243km Longest Day event in the Kathmandu Coast to Coast on Saturday. It was Clark’s fourth victory in the event and he clocked an impressive 10hr 45min 1sec PHOTO: WAYNE PARSONS
After a year away, Sam Clark made a storming return to win the Coast to Coast event on Saturday.

Clark, from Bay of Plenty, had previously won three consecutive titles. However, after taking a year’s sabbatical from the sport in order to freshen, he summed up Saturday’s victory as a "good feeling".

It ended up being a straight shootout between Clark and Wanaka’s Dougal Allan who won last year.

Clark and Allan wasted little time in getting involved early. Clark led the 3km run off the beach to the transition for the 55km cycle stage to Aichens.

The pair were joined by 13 others in a lead group of 15, including the Christchurch pair of Bobby Dean and Rhys John.

Only with the transition to the 33km mountain run up Deception Valley and over Goats Pass did the leading group begin to spread out. Ryan Kiesanowski and John were first out of the blocks from transition, followed closely by Clark, Allan and Dean. This set up what became an unforgiving race of attrition, as the pace went on up front.

Clark’s strength and agility over the rugged terrain had him holding a 3min lead on John and Dean at the Klondyke transition back on to the bike for a 15km ride to Mt White Bridge and the transfer to the river stage.

Allan, despite being six minutes further back, was starting to haul in the trio ahead of him. Overtaking Dean and John on the river stage, Allan was still short of Clark, who smashed the record for the 67km kayak stage. Focused on the end game and a fourth world title, a jet-fuelled Clark then scorched the 70km cycle to complete the 243km course and lift a fourth world cup of multisport in a personal best time of 10hr 45min 1sec.

Much had been mentioned about the cycle stage to the finish at New Brighton being the decider. But in the end, Allan had no answer for a rampant Clark, who rode hard to the finish to add almost a further two minutes of pain to Allan’s chase

Clark said all his hard work in preparing for the race had paid off. He even shaved the hair off his arms to help with the aerodynamics on the bike.

"Dougal is a top competitor and it feels so good to be pushed the whole way and just manage to get away with it. I don’t know how I managed it," he said, adding that he was worried about Dougal’s presence "from the very start to the very finish".

"He [Allan] has been working away so hard on his paddling, I had no way of knowing if he was catching me. I just had to keep going hard."

As for returning to take up the challenge for title No5, Clark said his immediate goals were to take some time out to assess his future.

He had no intention of chasing down Steve Gurney’s record of nine victories.

"Maybe it’s time to move on and finish it on a high."