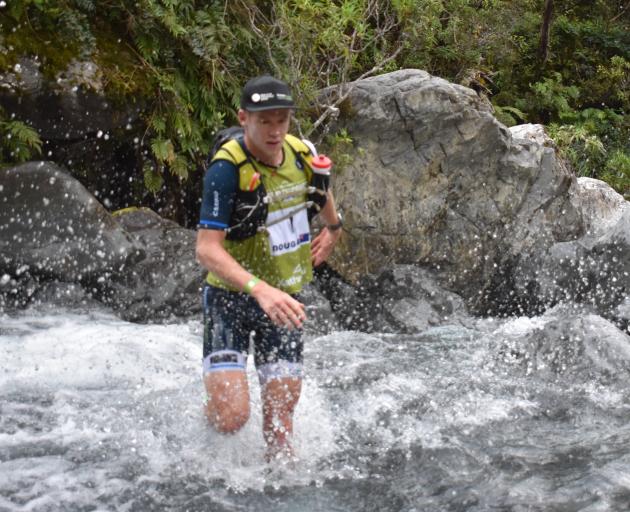 Dougal Allan tries to make his way through a waterway at last year’s Coast to Coast event. PHOTO: WAYNE PARSONS
Dougal Allan will carry the favouritism tag on his shoulders as the Coast to Coast longest day event starts tomorrow.

Finishing runner-up to Sam Clark last year has provided Allan with renewed enthusiasm and a hunger to lift the world championship of multisport for a second time.

Although disappointed with his result and not finishing as close to Clark as he would have liked, Allan (35) was quick to pick himself up and draw positives from the race and reflect on mistakes to better prepare this year.

Key for Allan once again will be to set himself up with a platform over the initial 55km bike and 33km alpine run stages from which to launch an attack over the second half of the race.

“I felt that I did that last year, even though I didn't have great legs on the run,” he said.

There is always room for error following the alpine run and the river stage is often a point of difference. Battling higher than usual water levels and a southerly front blowing through the gorge section last year proved to be Allan's undoing.

“I'm a hot weather racer. And so the colder conditions didn't help when you're matched up against one of the best in the world in Sam Clark. It's just those small details that you want to fall in your favour, like temperatures and conditions. But at the end of the day you should be able to win, regardless of the conditions, if you want to be considered the Coast to Coast champion.”

Despite difficult conditions on the water he was still racing to win but having got cold, couldn't muster up sufficient speed over the 70km cycle section to the finish at New Brighton.

Not one to reflect on what may have been, Allan has taken a more measured approach to this year’s race along with coach, three time Halberg Award winner Gordon Walker.

One thing Allan will be requesting from the weather gods this year, it is for lower river levels.

“It's a strength of mine and lower river levels keeps everyone on the water for longer. My perfect conditions are almost a drought really. Low rivers, fast run, slow kayak and a nice easterly into the city on the last ride.”

“The river may be high again unfortunately. But then if you want to be the best, you should be able to win no matter what the conditions are, and Sam [Clark] certainly proved that last year.’’

Allan's reset of his training and preparation intensity is already paying dividends.

In recent racing, he has notched up victories in Opotiki's Motu Multisport Challenge (considered a benchmark race for Coast to Coast), the inaugural Challenge Wanaka Multisport Race and the annual Waimakariri River Classic.

Expected to be Allan's strongest rivals for the 2021 world multisport crown are the Canterbury trio of Sam Manson, Steve Melton and Ryan Kiesanowski, along with Tauranga's Scott McDonald.