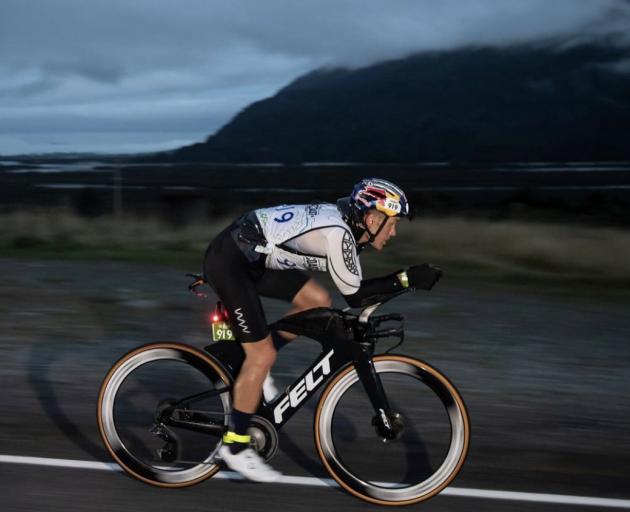 The three-time champion returned to the event for the first time since 2017, making a late call when Ironman New Zealand was cancelled.

Currie (35) saw it as an opportunity to get a race under his belt before leaving for Utah in May for the world championships in his preferred discipline, but showed no signs of Coast to Coast rustiness as he launched an early assault on the event.

Enforced course changes because of flooding in the upper Waimakariri catchment — including an abbreviated kayaking stage and drastically altered cycling sections — perhaps played into his hands.

Setting off from Kumara, Currie rode in a bunch with Bobby Dean, Dougal Allan, Sam Manson and Ryan Kiesanowski for a good part of the first 55km ride.

It was if the Wanaka athlete had never been away as he dominated the elite men’s field, dragging the first 12 riders through the first stage and breaking the record time, 1hr 38min 4sec, set in 2011 by Carl Bevins (Christchurch) by 1min 11sec.

Then, as the leading group dispersed on the run up Deception Valley, Currie wasted little time in stamping his authority on the 33km alpine run over Goat Pass.

The swollen creek crossings did little to slow his momentum as he went through the transition at Klondyke, to the 112km Porters Pass bike then an abridged kayak stage on the lower Waimakariri River, holding a 14min lead.

Allan, who had taken a tumble on Goat Pass and was struggling with an injured right foot, was hampered in his efforts to reign in Currie, who stretched his lead to 20min entering the river stage.

Allan’s brave battle to overcome his discomfort was rewarded as he locked in second place at the river stage, while 2021 runner-up Manson, Kiesanowski and Dean were left to battle it out for the bronze medal.

With course adjustments making for just a 12km cycle stage to the finish, there appeared little room for error on the water.

Despite Allan biting into his lead, Currie beached his craft at the Kaianga transition still holding a seemingly unassailable lead.

With the damage done and the race virtually in the bag for Currie, the shorter final stage distance left him unchallenged and with a chance to soak up the occasion as he crossed to finish the 243km journey in 9hr 45min 23sec.

“It doesn’t get any easier,” Currie said soon after breaking the tape.

“Dougal and I are actually best mates and it was a huge decision to get on the start line. But once you get into that race mode and you’re out there, there is only one thing you can do. I just had a good day.

“I had a good run. A good bike. And I knew the river was going to be so high that as long as I stayed in the fast water and kept my boat up the right way, I shouldn’t lose too much time.

“I probably think that with all the ironman stuff I’ve been doing over the last five years, my cycling has come a long way. I just put my head down and do what I could do.”

Allan put on a brave face as he hobbled up the finishing chute.

“It’s just amazing to get to the finish line, although it was in doubt at times,” Allan said.

Allan said the late course changes did not affect his preparation too much.

‘‘I was just pleased to have a race to be honest, and put all my training to good use.

“Braden is a different class of athlete. It’s pretty amazing to see what an athlete of Braden’s calibre can do on the course.