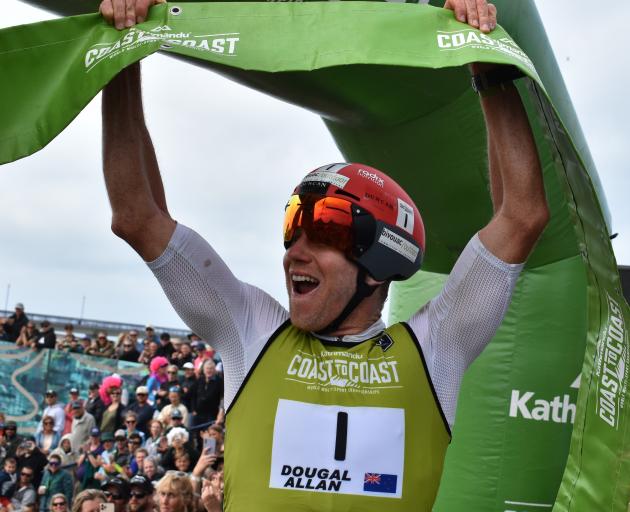 Dougal Allan raises the finishing ribbon in triumphat the finish of the Longest Day last year. PHOTO: WAYNE PARSONS
Dougal Allan knows all about the Coast to Coast and its unpredictable storylines.

For 40 years, the annual race from the Tasman Sea to the Pacific Ocean has offered up drama on a Shakespearean scale.

Covid has cast its shadow this year, crushing the anniversary celebrations of the oldest multisport race in the world and limiting the event to the 200 competitors contesting the Longest Day.

They will face the starter tomorrow in two separate pods of 100, the first limited to elite athletes and the second to 100 in the open class.

Added to this is the forecast of bad weather — and fresh are the memories of the 2010 weather bomb, when the 243km course had to be rejigged thanks to dangerously high river levels.

Allan, the defending champion, will be returning for a ninth time on the Longest Day course after winning the two-day race in 2008.

The 36-year-old Wanaka athlete and coach went toe to toe with Gordon Walker (Auckland) in terrible conditions in 2010 before Walker pulled away over the final stages of an abbreviated kayak stage between Little Hagley and Sumner to win a third title.

“There are a lot of moving parts in this race,” Allan said, adding that often preparation goes out the back door as the course can be challenging in so many different ways.

Allan said he was ready to “give it a good shot” this weekend.

He likened his preparation to how he felt when he returned to the course in 2019 to win his first Longest Day title after six years on the national and international ironman circuits.

“It [ironman] gave me a chance to hit the reset button.’’

Allan said the Coast to Coast was the sort of race in which you had to get the balance right with health, training, nutrition and preparation.

He found that out the hard way when Sam Clark (Whakatane) took the race to him in a fast and furious sub-10hr battle in 2020.

“I don’t know how many more Coast to Coasts are in me and I’m not sure if this will be my last.

"But if one person was to draw me back to race it, it would be Sam Clark.

Allan has been pleased with his pre-event racing and preparation, with victory in the Motu Challenge in October, before playing an integral role in the Mike Greer Homes team in his first Tour of Southland cycle race.

He has also picked up wins in smaller regional multisport races since October, but his third place in the annual 67km Waimakariri River Classic held over the same kayak section as that used for the Coast to Coast gave him the reality check he needed for tomorrow.

“It was not quite what I was hoping for. It wasn’t a great day.

"I had a few dramas — fell out of the boat. But it was good to get it in the body and mind before the big dance."

Allan said his tactics of managing his energy and nutrition levels over the first two stages and only really beginning the race post-Klondyke would not surprise many.

That paid off last year when he hauled in the early leaders to win by 10min over Sam Manson (Christchurch) and be 20 minutes faster than anyone else from the end of the run to the end of the race.

Manson is expected to be one of the main challengers for Allan’s quest to win back-to-back titles, while other threats in the elite field are expected to come from Bobby Dean (Te Puki) and Cantabrians Ryan Kiesanowski and Sam Goodall.

The elite category of the Longest Day race starts from the shores of Kumara Beach at 5.50am tomorrow.

The first man is expected to break the tape about 5pm and the first woman just after 6.30pm.