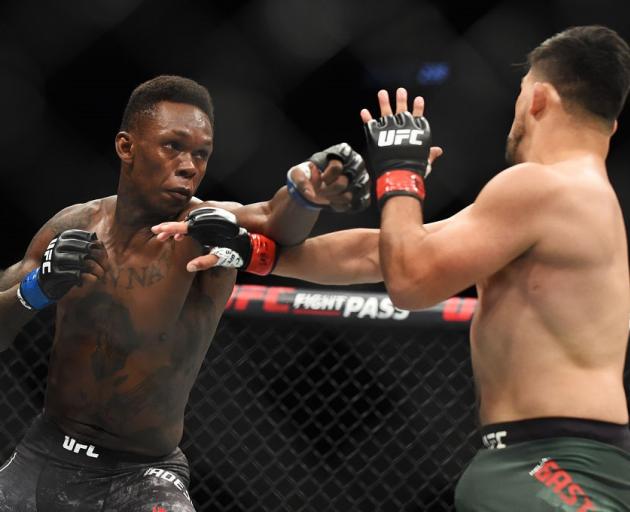 Israel Adesanya during his win over Kevin Gastelum in Atlanta. Photo: Getty Images
In his fight for the UFC's interim middleweight title, Israel Adesanya was pushed to a place he'd never seen in the octagon before.

He had been the distance in a five round bout before, but against Kelvin Gastelum it was different. Against Gastelum he wore some heavy shots and was rocked a number of times.

But going into the fifth and final round of the bout with everything on the line, the words of City Kickboxing head coach Eugene Bareman lifted Adesanya to a dominant final five minutes.

"I told him to remember the pressure we'd been through in the gym," Bareman told the New Zealand Herald. "I told him to go back to the dark place that we'd been to in the gym because it's very similar to the place he was at in that fifth round.

"I needed him to find a place and just become numb to any sort of fatigue. Your mental power is so important in fights like that, and Israel proved that he could push through some real adversity."

Adesanya was in real trouble during moments of the fight, particularly in the fourth round when Gastelum caught him with a head kick which Bareman called a "brilliant, masterful piece of shot selection".

But Adesanya responded to the message from his corner, returning to the centre of the octagon with a second wind for the final round. While Bareman said it was the most fatigued he had ever seen Adesanya, Gastelum appeared to be even more tired and the Kiwi capitalised on it.

Adesanya was landing plenty of heavy shots in the final round and looked like he might have done enough for a stoppage inside the final minute of the fight as he pounded away on a grounded Gastelum, who has not been knocked out in his professional mixed martial arts career.

But despite cries from Bareman and the rest of Adesanya's camp to the referee to put a stop to the bout, he allowed the fight to run through the final seconds and leave the result in the hands of the judges.

"I want to see the fighters kept safe and it was pretty clear Kelvin's health and safety were compromised. He just couldn't react; he lay in the turtle [position] with his hands over his head not moving," Bareman said.

"I'm not one to talk about the refs. The ref made the call, Kelvin wouldn't have wanted it to be stopped; it is what it is.

"Both fighters came out of there with relatively good health and they can live to fight another day. That's the best result."