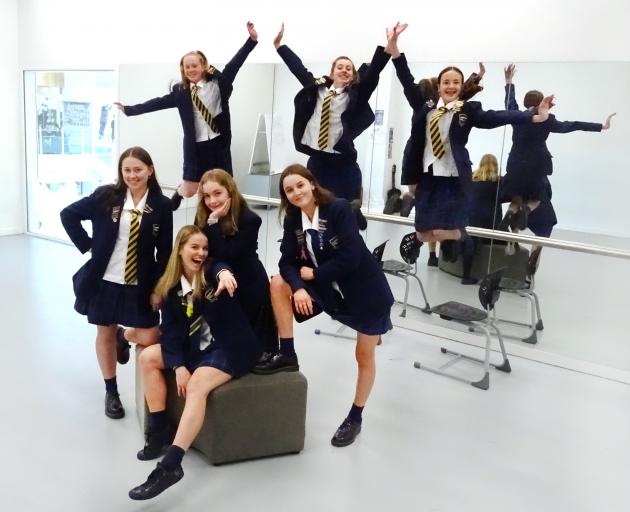 Wakatipu High School hip-hop dancers will be among 300 performing at the Queenstown Events Centre today in the NZ Schools Hip-Hop Championships. Pictured, back, from left, are Queen Bee members Nadia Burns (14), Sophie Thompson (15) and Megan McCulloch (14). Middle, from left, are Jail Break members Amelia McIlroy (16), Abby Harford (17), and Lily Brabant (18), and front Emma Cordelle (17).PHOTO: TRACEY ROXBURGH
Lycra will be the outfit of choice at the Queenstown Events Centre this weekend when the resort hosts the NZ Schools Hip Hop, Sport Aerobics and Fitness Championships for the first time.

NZ Competitive Aerobics Federation chief executive and event organiser Sean Cresswell said almost 300 dancers, primarily school-aged, had entered in the hip-hop championships, being held today, and about 200 athletes would be showing off their strength, flexibility and fitness tomorrow and Sunday during the sport aerobics and fitness sections.

Competitors were coming from Auckland, Wellington, Christchurch, Invercargill and Dunedin - the latter being the federation's largest region.

The hip-hop championships were primarily aimed at schools, but private dance studios also had their own section, as did adults in which crews could "compete up".

"So, an adult crew can have primary kids in it - you can compete to the age of the oldest person.

"One of our Auckland crews, for example, they're entered in the adult category but they are two coaches who are dancing with ... their students."

There was also a "mega crew" class where between 12 and 25 people would take the stage at the same time.

In the aerobics, the focus was on technical intensity. Fitness competitions would be held all day tomorrow and Sunday and feature three New Zealand representatives heading to the world championships being held in Holland next month.

Mr Cresswell said all competitors, coaches and support crews had been "strongly advised" to avoid the event if they had not been vaccinated against the measles - so far only one athlete had elected not to participate.

Tickets were available online for spectators; however, anyone with measles, or who had been in contact with an infected person, was asked to stay home.