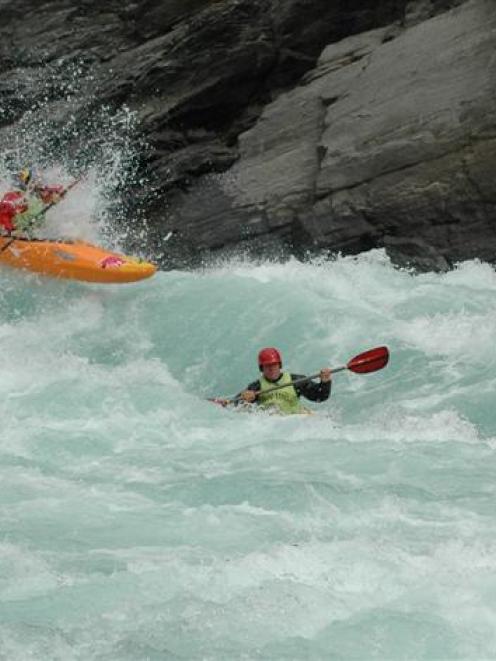 Kayakers (from left) Ryan Lucas (Hamilton), Rafa Ortiz (Mexico), Tom Botterill (Chrischurch) and Barney Young (Greymouth) compete in the extreme kayak race on the Kawarau River on Saturday. Photo by Marjorie Cook.
The powerful grade four Citroen rapid on the Kawarau River proved a challenge to many of the 48 kayakers on Saturday as they battled for line honours in the extreme race and overall New Zealand championship titles.

"The rapid proved more than a challenge for some with a higher than normal number of competitors taking swims," he said.

The event was the last of a three-race national series. The first two were held earlier this summer on the Wairoa and Kiatuna Rivers in the North Island.

Sutton secured his second win of the series and so won the national title.

The women's race was won by Sophie Mulder, of Murchison, ahead of Courtney Kerin (Oamaru), Nini Bondhus (Norway) and Louise Jull (Rotorua).

For the second year, there was a junior division, which was won by Nelson's Tommy McDowell.

He also won the national junior title with three wins from three races. Alexandra teenager Max Rayner was second and Steven Bartlett of Queenstown was third.

Competitors launched from a 4m-high ramp in heats of four.

They raced through the rapid with the top two from each heat progressing to the next round.

"A good start is important to get a clean line around the dominating centre rock at the top of the rapid," Bailey said.

"A bad line here can mean disaster if you end up eddied out against the cliff, as many found out on Saturday. There is still plenty of excitement after that with huge wave trains to negotiate and a couple of large hydraulic holes to avoid."