Kickboxing: Bound for Brazil with the Black Kicks 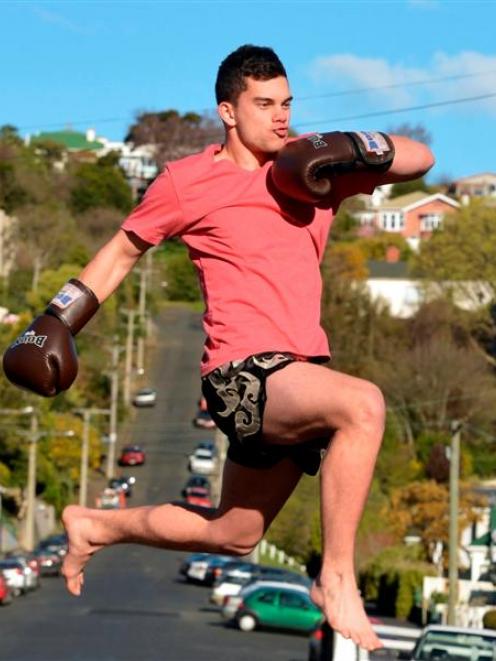 Dunedin kickboxer Nick Aretema is excited about an upcoming trip to Brazil. Photo Stephen Jaquiery.
Nick Aretema knows all about life in a small town. But growing up in Milton might not be the best preparation for visiting the most populous city in South America.

Later this month, Aretema (20) will compete in the World Association of Kickboxing Organisation's world championships in Guaruja, near Sao Paulo, in Brazil.

He is the only Otago representative in a 15-strong New Zealand team known as the Black Kicks.

Aretema said he was both ''excited and proud''. He hoped to go as far as possible in the tournament, but realised he would come up against some experienced fighters.

It will be Aretema's second world championships after he was eliminated in the qualifying rounds in Macedonia two years ago.

''I am sure I will be nervous, but I am confident I can compete,'' he said.

He will fight in the under-63.5kg low kick category, meaning punching and leg kicks only are permitted.

It will be a few kilograms under his normal fight weight, but he had been consistently training six days a week, Aretema said.

At about 175cm, Aretema has virtually no reach advantage. He said he throws a high volume of kicks and punches to help negate this.

He was selected after a trial in Invercargill about two months ago, and with the help of what he described as ''just the best group of supporters'', raised $5000 travel costs.

Aretema, in his final year of a diploma in mechanical engineering, grew up in Milton before moving to Dunedin last year.

He joined the Mejiro gym four years ago and had his first fight a year later. Coming from a background in karate, Aretema said he had easily transferred his skills.

He credited Mejiro's Wahid Wennekes with teaching him everything he knew, and while he had only been at Team Hammerhead for a short time, was impressed with Matt Toa and his crew.

Aretema, who works in security in his spare time, said he was constantly improving his technique, and despite having just two wins from eight fights, was confident of more success.

''We want to send guys that have that potential,'' Thompson said.

''Maybe they will not medal the first few times round, but three or four championships later, they might do well.''

The championships, starting at the end of the month and finishing on October 6, will be contested across 38 divisions in male and female categories.

New Zealand coach Jason Vorster said he expected the team to match or better its tally of two bronze medals in Macedonia.

Vorster said big crowds were expected for the finals. Russia and Italy were two of the strongest teams at an event that could involve as many as 120 countries.

Both Thompson and Vorster will travel with the New Zealand team.

Guaruja is 87km from Sao Paulo. Guaruja has a population of about 310,000, and about 20 million people live in Sao Paulo.