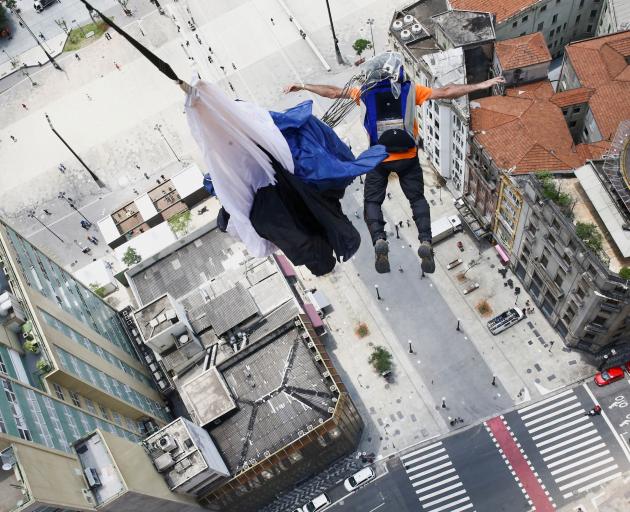 A base jumper leaps from the 28-floor Martinelli Building in Sao Paulo, Brazil. PHOTO: REUTERS
The perfect 10 ...

Imagine a game where you come up with all sorts of crazy predictions for New Zealand sport.

Think, say, of the prospect of Joe Moody kicking three drop goals to win a Rugby World Cup final for the All Blacks.

Hamish Bond switching to golf and winning the British Open.

Then imagine a random Black Cap — someone with only a handful of test caps — taking 10 wickets in an innings against India in Mumbai.

Surreal, remarkable, incredible — the dictionary cannot do justice to the efforts of Ajaz Patel, who became just the third bowler in test cricket history to achieve perfection.

It means Patel, who seems like a likeable bloke as well as a top bowler, has earned his place in the Black Caps for a long time.

It also means we need to spend some time ranking his achievement.

In New Zealand cricket terms, it goes very close to the top.

The only real challenges surely come from Brendon McCullum’s triple century against India at the Basin Reserve, and Richard Hadlee’s nine for 52 (match figures of 15 for 123) against Australia at the Gabba.

How to separate those three extraordinary performances?

Hadlee’s spell of fast bowling that day in Brisbane was otherworldly — and remember he took the catch that ruined his own bid at perfection. It also led to victory by an innings.

McCullum’s innings was unbelievable. It might never be beaten by a New Zealander. Not much more to be said.

But I think, given the context and the fact it was just the third 10-wicket haul in some 2400 tests, Patel’s Perfection slots in as the second-greatest performance in New Zealand cricket.

And in terms of overall New Zealand sport? Somewhere in the top 10.

My colleague Mike Houlahan reminded me of something that would have been a great contender for our piece on Wednesday looking at astonishing individual performances that went unrewarded.

It is 12 years since Russian footballer Andrey Arshavin scored all four goals for Arsenal against my beloved Liverpool at Anfield.

Arshavin deserved to end on the winning side that day but it finished in a 4-4 draw, and he had to be content with man of the match. 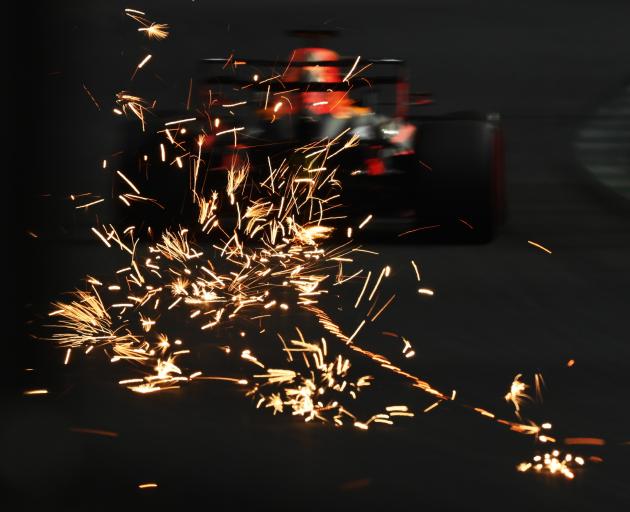 There is too much at stake to make too much comment from this distance on the allegations levelled against Black Ferns coach Glenn Moore by one of his players.

Mental heath has to be taken seriously. It is also a minefield, and always — ALWAYS — more complex than things seem on the surface.

I will just point out Moore — full disclosure: I have known him for 21 years — has been in this game a long time, and it would be a shame if one social media post and a subsequent pile-on suddenly turns him into an awful coach.

Facebook is a cesspit, yes, but it occasionally throws up something interesting.

I don’t know who runs the Forgotten Rugby Battlers page but it does a fine job looking back on some of the blokes who made us smile.

The Provincial Battlers XV has just been named, based on public vote, and to my delight it includes some outstanding players from my part of the world.

Old Golds legend Ralphie Darling is at prop (and captain!), and my old mate Dicko (Glenn Dickson, who played for North Otago and Otago) is at second five.

Former St Kevin’s College pupil Kieran Moffat is at centre, and former Otago captain Paul Grant is at No8.

The Last Word has enjoyed writing the odd story about petrolheads — notably this young Southland star Cormac Buchanan, and our splash on the speedway women last week — but generally has little personal interest in (and even less knowledge of) of the motorsport game.

But come on, who isn’t at least slightly excited by what is happening in Formula 1, where the season’s championship will be decided at the Abu Dhabi GP this weekend?

It is the tightest title race in 47 years, and the intense rivalry between British master Lewis Hamilton and Dutch tyro Max Verstappen has breathed life into a sport that is too often just about technology.

We don’t tend to get a lot of sports games abandoned in this country, where the climate is temperate and the fans don’t tend to run on the ground threatening to beat up the officials.

But they have been having a shocking run in the Northern Premier League football competition in England, where a couple of weeks ago the following results were posted:

- Match postponed due to snow-covered pitch.

- Match abandoned after 60 minutes due to floodlight failure.