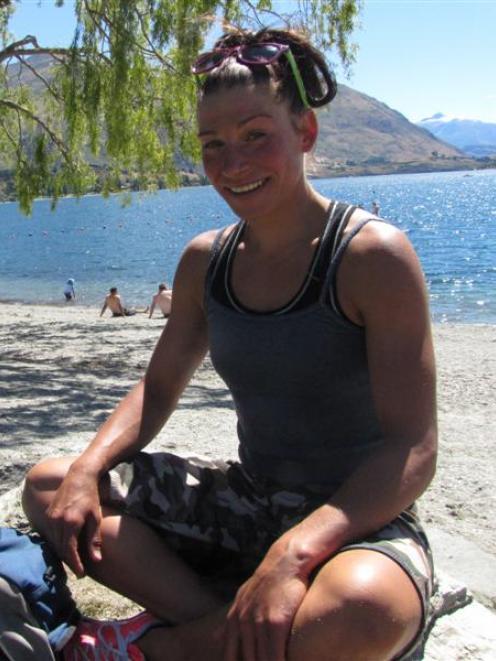 The professional athlete, who is coached by Val Burke, had a successful year in 2011, backing up her second place in Challenge Wanaka with a string of top places in other events.

Maier is a home-town favourite this year, after winning hearts last year when she crossed the finish line in second place clutching a striped Tigger.

"If I reach my time target, I will be happy. Then it won't matter if I am first or sixth," Maier said yesterday.

"My goal is private but it's good and fast."

The flamboyant athlete, who has been seen racing other events in fairy wings, loves crowd support and particularly wants it on the bike route between Tarras and Wanaka.

She will be riding a pink time trial bike, running in pink shoes and will sport the number 51.

"That's a great number. I love it already. I am not sure how it lines up with the stars, but if I can just be myself on Saturday, the result will speak for itself," she said.

She believes if she can stay in her own little bubble, she will not feel the pressure of racing favourite Gina Crawford, of Christchurch, who is on the comeback trail just months after having a baby, and top Australian athlete Christie Sym, who was third last year.

"I suppose I am nervous. But I feel pretty good. I feel optimistic and positive about the whole thing. I am really excited to have Gina back in the race on this course. I know she has held the title and has the race record.

That makes me even more excited that I can put myself up against her and see where I am at," Maier said.

Maier knows Crawford is a faster swimmer but feels technique tips offered by top Kiwi triathlete Nicky Samuels, of Wanaka, have improved her efficiency and speed.

Foot pain, most likely associated with a pinched nerve in the lower back, has been troubling Maier while cycling, so she has been working with physiotherapist Gin Rutledge, sports doctor Nat Anglem and Olympian cyclist and former New Zealand cycling coach Jon Andrews to improve the situation.

"I don't know how many thousands of kilometres I've done since winter, but it should be enough," Maier said.

Her race plan includes the instruction "imagine you are dancing" on the bike.

All she wants now is for an enthusiastic crowd to dance with her as she powers through the aid stations.

"I want lots of noise and dancing, happy people," she said.