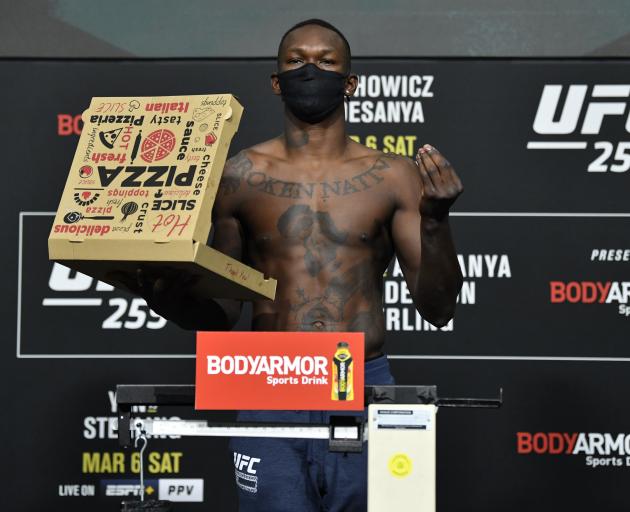 Israel Adesanya poses with a pizza box at the weigh-in for UFC 259. Photo: Getty Images
Israel Adesanya knows how to work the room when moving up in weight. After all, he's been here before.

The UFC middleweight champion will challenge Jan Blachowicz for the Light Heavyweight gold on Sunday at UFC 259 in Las Vegas; the fight becoming official as both men weighed in at or below the 205lbs (93kg) limit.

For Adesanya, making weight was never going to be an issue given his natural weight class is 20lbs lighter.

He made sure to remind everyone of that after weighing in on Saturday, tipping the scales at 200.5lbs before posing for photos on the scales with a pizza box in hand.

It was a move that entertained the media in attendance and many on social media as images quickly found their way online.

However, it's not the first time Adesanya has made it clear making weight in a higher class was no issue.

In 2015, Adesanya weighed in for the King in the Ring heavyweights tournament in Auckland holding a tray for donuts. He went on to win the 8-man elimination tournament with the wins inside the distance.

Adesanya will close the show in the main event, with two other titles being contest before he and Blachowicz compete (available on pay-per-view through Sky Arena, Sky Sport Now and UFC Fight Pass).