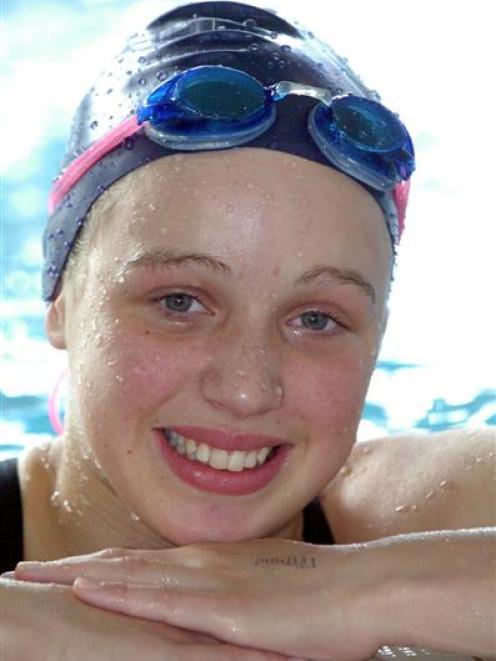 Phoebe Williams
Otago swimmers returned with a bag full of medals from the South Island short course championships in Christchurch at the weekend.

Fourteen-year-old Lil Clearwater (Neptune) had an excellent meet, claiming three golds, a silver and a bronze and breaking three Otago age-group records in the process.

Her swim in the 100m backstroke not only lowered the mark set by Stacey Clarke in September 1993, but she beat rival Otago swimmer Phoebe Williams (Waves) for gold.

Williams (15) provided one of the highlights with a superb swim in the girls 14 to 15-year-old 800m freestyle, lowering her own Otago record by more than 4sec to 8min 48.16sec.

The second-placed swimmer was more than 20sec slower.

Emily Poon (13) picked up eight individual medals in girls under-13 events - one gold, six silvers and a bronze.

Poon was placed in every one of her events.

Frances Newbold (15), of Neptune, broke the 50m butterfly record which had stood for 11 years, and Matthew Glassford set an Otago mark for the men's open 100m breaststroke.

In all, Neptune had 18 swimmers at the event and claimed a total of 41 individual medals.

Otago swimmers dominated the long-distance events, claiming the first three spots in the men's open 1500m freestyle and the under-13 1500m freestyle.

"A few years ago we weren't much of a force at the South Island champs at all, but we had nearly 70 swimmers there and you can see the results," he said.

He said Otago swimmers were well placed for the national short course championships beginning in Mt Maunganui later this month.