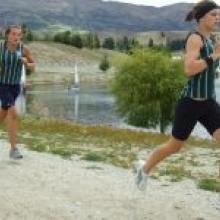 Barclay emerged from the water as the leader after a 300m swim and was first away on the cycle. Bayfield High School team cyclist Jeff Notman (16) was close behind, capitalising on a quick handover from his swimming teammate Amelia McDonald-Nairn (16), and overtook Barclay on the 22km leg.

This gave his running team-mate Henry Benson-Pope a comfortable margin, which Barclay could not close over the 6km course beside Lake Dunstan.

Barclay won the overall individual title in a time of 55min 56sec. It was his first attempt in the Year 11-13 category, after winning the Year 10 and Year 9 titles in successive years.

Barclay had won the 1500m at his school's athletics day on Tuesday. He wants to make the New Zealand junior triathlon academy and needs a top-five finish at the national secondary school championships at Lake Karapiro, near Cambridge, in April.