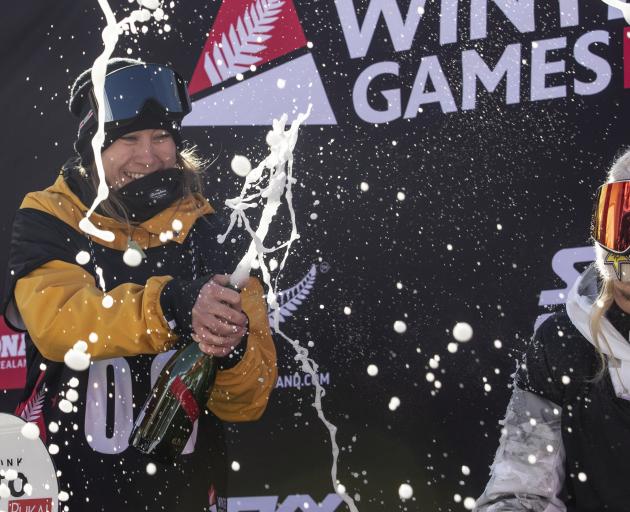 Finland’s Enni Rukajarv enjoys the spoils of victory on the podium of the women’s Snowboard World Cup Big Air at Cardrona Alpine Resort on Saturday. PHOTO: WINTER GAMES NZ
It was a weekend for the international competitors as the Cardrona climate hampered the Snowboarding World Cup Big Air event at the Winter Games New Zealand.

"It means everything," a delighted Corning said.

"I'm happy to come out with the win."

Fellow countryman Redmond Gerard (19) finished second with a combo of a frontside 1440 tailgrab and a backside triple cork mute.

"Chris just did did a perfect backside quad so that's pretty nuts and I'm pretty pysched to see his victory lap," Gerard said.

Finland's Kalle Jarvilehto booked a spot on the podium as he pushed top qualifier Nicholas LaFramboise, of Canada, out of the top three.

It was always a possibility, after the weekend forecast had led to Saturday's qualifiers being moved forward a day.

Kiwi snowboarder Zoi Sadowski-Synnott had to settle for fifth spot after her qualifying first run score of 78.25 on Friday.

The Wanaka 18-year-old will shift her focus to this weekend's slopestyle events at Cardrona.

The weather was also a factor at Coronet Peak on Friday as the Night Parallel Slalom dash was enveloped in fog.

The action resumes today with the alpine super G series at Coronet Peak and the freeski and snowboard halfpipe qualifiers at Cardrona.