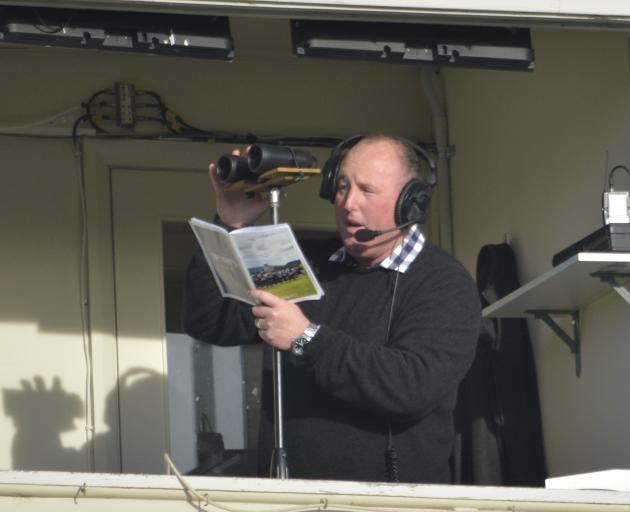 Teaz will stand down after nearly six years of full-time race calling in the province to take on a contracting role with Trackside in the Waikato.

The rigours of a relentless travel schedule have taken their toll on Teaz, who lives at Ohaupo, and that led to him making what he called a tough decision to stand down.

"The travel is the only reason, really," he said.

"I looked in the mirror the other day and thought `I am looking old'."

Teaz has been forced to take on his hectic travelling schedule due to his commitments to his harness racing stable at Ohaupo.

He and wife Megan had planned to move to Otago after the commentator took over the province's calling duties from Tom Wood in 2013.

However, the couple's stable continued to grow, which meant their moving date was put back and eventually their plans to shift were canned.

"Originally it was going to be six months and then we were going to be completely shifted," Teaz said.

"From the time I got the job, the phone used to ring off the hook with owners offering more horses.

"So, we kept pushing back the leave date."

The hard work and the sacrifices the couple have made to establish their stable has paid off.

They have produced 31 winners at an excellent strike rate since Teaz took on the Otago commentator's job in 2013.

The husband and wife are enjoying their best season, producing seven wins from just 64 starts.

Their growing horse numbers and continued success have meant Teaz will stay put and step down from his role in Otago.

"Now we are working 10 or 12 horses all of the time and I thought `why throw away something we have worked hard for when we started out with nothing?"'

Teaz's new role with Trackside will involve presenting on its television channels and hosting its radio programmes.

He hopes to continue calling races and he anticipates he will be used as a fill-in commentator in the North Island.

"I will miss it. I am throwing away opportunities to call races week to week.

"I might not call another race for three or four months. It could be 12 months, I don't know.

"I haven't got any commentating days set for next season, so I am going to be off the bench."

He had made good friends in all three racing codes and would miss the entire southern racing scene.

"I'll pretty much miss everything racing-wise.

"I always enjoyed it and I can't remember many days when I didn't.

"I will miss everything at Forbury Park. It has been my favourite track."

Teaz said he had become good friends with Wingatui racing personalities Graeme and Ann Mee and that had helped him extend his time in the South.

The commentator had also developed a strong rapport with colleague Dave "Davey Mac" McDonald during the past six years.

The pair formed a popular on-air duo and Teaz said he would miss not getting the chance to continue that.

"I will miss working with Davey. I think most people will realise that.

"I didn't know Davey before I went down there, but we quickly became good friends and we are similar-thinking people.

"And I think that showed on air on air, I hope."

McDonald will call the remaining meetings in Otago after Teaz's final night of calling at Forbury Park on Thursday.

Teaz said he was unable to elaborate on who might call Otago meetings next season.