Ultimate Sniper on target in free-for-all 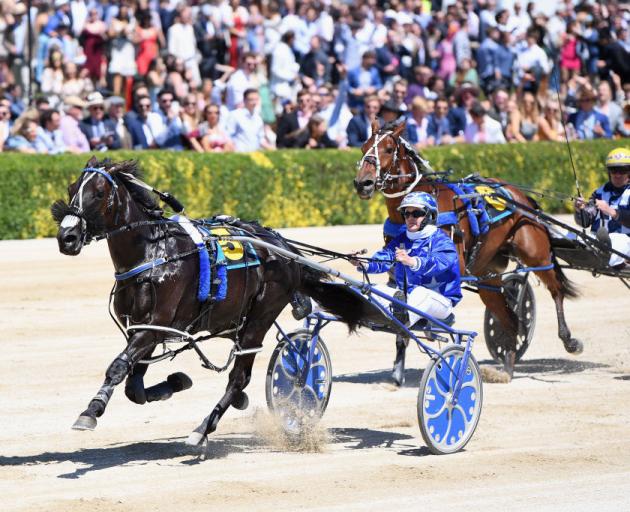 The Mark Purdon and Natalie Rasmussen-trained 4yr-old set a big Addington crowd buzzing with a tough effort that reminded harness fans why he is New Zealand's reigning champion 3yr-old.

Rasmussen was denied the chance to take the Bettor's Delight pacer to the front early in the race when driver Matt Anderson insisted on holding the front with A Bettor Act.

That set Ultimate Sniper a massive task to win - one co-owner Phil Kennard admitted he thought was impossible during the running of the 2600m group 3 feature.

''I wasn't confident at all, when he was doing all that work.

Ultimate Sniper stopped the clock in a sizzling 3.06.4, setting a new race record.

The performance was undoubtedly the best of Ultimate Sniper's 4yr-old campaign, which has included a derailed New Zealand Cup bid.

Kennard puts the horse bouncing back to his best on the country's biggest stage down to his conditioning.

The pacer was sent to the paddock for several months after his 3yr-old season was ended early by injury.

Ultimate Sniper made the most of it, returning to work far from the sleek athlete that won yesterday.

''Today is the first day we have seen his ribs - he just hasn't been ready,'' Kennard said.

''But when I saw him at the stables yesterday, I thought, this horse is ready.''

Purdon said the All Stars stable would monitor Ultimate Sniper's recovery before deciding whether he would start in Friday's New Zealand Free-for-all.

The master trainer said his first inclination was not to line the 4yr-old up on Friday.

Rasmussen made sure her charge was not going to be unlucky by taking Ultimate Sniper to the parked position.

She then combined with her stable's 3yr-old Amazing Dream for arguably the most impressive win of New Zealand Cup day.

Williamson produced a patient trotter who put on a faultless display, after being a handful in some of his races this campaign, on New Zealand's biggest harness racing stage.