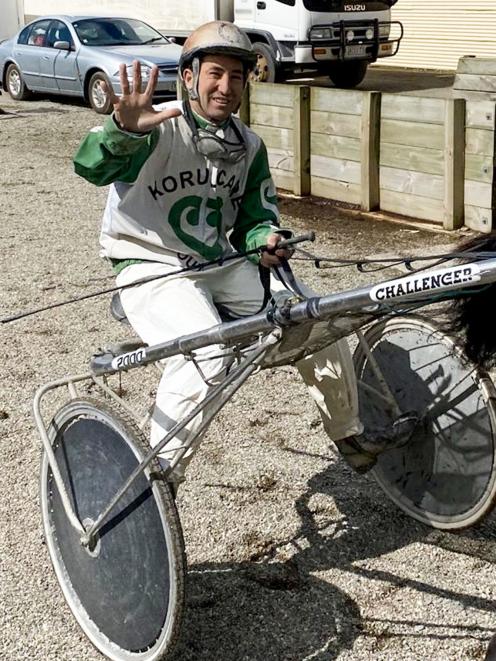 Williamson matched his five race-winning effort on the grass circuit at his home track in 2017 when Holy Havoc ran to victory in race 10.

That success added to the wins he had already notched with Wolfenstein (race 2), Robyns Shadow (race 5), Monty Python (race 7) and Indulgence (race 9).

“It was a big thrill to get five wins,” Williamson said.

“I thought I had a few good chances at the start of the day and everything worked out pretty well.”

The Phil Williamson-trained 10yr-old had not won a race in this country since March of 2017.

In between then and Saturday, the veteran had won three races during an Australian campaign in which he ran third in the Interdominion trotting final.

Williamson, who has been the horse’s regular driver throughout his eight seasons of racing, was delighted to see the veteran back in the winner’s circle.

“It was great to see him back winning, he definitely deserved it.”

“It wasn’t that long ago he ran third in the Dominion.”

Williamson started his winning run when ever-improving Roxburgh pacer Wolfenstein secured his third win in his past six starts.

The reinsman landed a perfect run in the one-one for the Geoff and Jude Knight-trained 5yr-old from barrier 13.

Cast A Shadow won the corresponding race last year when it was run as the Gore Grass Cup.

Saturday’s race was originally named the Gore Grass Cup until heavy rain forced the meeting to be moved to the Gore track’s all-weather surface and the race name to be adjusted.

- A bumper turnout of trainers and buyers is expected to inspect standardbred yearlings on the Southern-Bred Southern-Reared Yearling Sales Tour, which starts today.

Many of New Zealand’s leading harness racing trainers and their owners will run their eyes over what are hoped to be future racing stars at four Southland properties today.

The tour will continue in Southland tomorrow morning before it stops at three Otago properties.

Yearlings prepared by Tuapeka Lodge, Knight stables and Graeme and Ann Mee will be shown to the busload of potential buyers tomorrow afternoon.

The southern-bred yearlings will be sold at the national yearling sales in Christchurch on February 18-19.