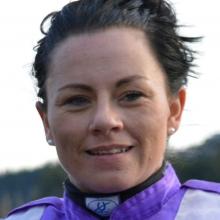 The Irish-born rider has been out of the saddle since April, recovering from a knee injury.

Wynne made a comeback to riding in March following 10 months off after injuring the knee in a fall at Wingatui.

Though medical professionals gave her the all clear to start riding, her knee again became a problem about six weeks after her return.

"When you look back, you could say I came back too soon," Wynne said.

"But when the professionals are giving you the go-ahead, you are going to go. I didn't feel good, but I wanted to keep going to ride Who Dares Wins."

Wynne rode the horse to win the Canterbury Gold Cup and Easter Cup at Riccarton before her second injury layoff.

"I can just move forward now, it is feeling good," she said of her knee. "I don't have any of the issues I had last time when I was starting off."

Wynne contacted Cambridge trainer Stephen Marsh about riding work at his newly established Riccarton base ahead of her return to trackwork.

She will combine with four of the trainer's runners at Riccarton today.

She will jump straight back into stakes company when she rides Bronte Beach in race 8, the listed Canterbury Belle Stakes.

Bronte Beach looks to have a draw advantage over her main rivals, who have wide barriers in the 1200m feature, but her barrier 3

"is actually not ideal for her," Wynne said.

"But I won't panic - it's not the worst draw. She is going well and I think she will be hitting the line strongly."

Wynne has the task of helping Rocanto break a winless streak that is approaching two years in race 7, the 1200m open sprint.

It is hoped the move to Riccarton from Marsh's Cambridge stable will revitalise the galloper.

"On his day he can he can go very well. I think the change of scenery down here can give him a boost."

The rider will also reunite with Diorissimo in race 6 and ride Miss Ricky Bobby in rating 65 company over 1200m in race 9.