Drysdale has missed out on the New Zealand single scull berth for the upcoming international season with Robbie Manson selected, after beating Drysdale in two recent races. 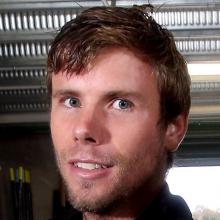 Robbie Manson
It means Manson will compete at the world champs in Austria.

Drysdale, though, is determined to row for New Zealand in Tokyo and wants to remain focused on the single.

If Rowing New Zealand don't allow him to compete at World Cup regattas, where countries can enter more than one boat in a category, he may row for another country.

"There's nothing stopping me going and joining a club in Fiji and getting the Fijian Rowing Federation to okay my entry for the world cups... that's just the way the world cups work. They are open to any athlete that's a member for a club in that country.

Rowing New Zealand is considering whether to support Drysdale in the single scull or move him to another boat - such as joining returning Olympic champion Hamish Bond in the eight.

After Manson got the selection nod in the single scull last year, Drysdale joined the quad but feels that time away from the scull hampered his efforts to beat Manson this year.

"I'm very hopeful that we can work together and it can be a 'win-win' for everyone but if I still have to do it the hard way which is outside the programme, then I am prepared to do that if that's what it takes to win a gold medal in Tokyo," said Drysdale.

But just how odd would it be lining up at an international regatta in a Fiji singlet rather than in the black singlet and silver fern?

Drysdale views it as simply a means to an end.

"You do what it takes... I don't see it for example as saying 'I'm going to row for Australia' and actually changing your allegiance completely. That's a whole different level and that's somewhere I would draw the line at."

Rowing New Zealand is expected to make a decision on whether it will support Drysdale in the world cup single scull events, next month.