Big No 8s to butt heads in final 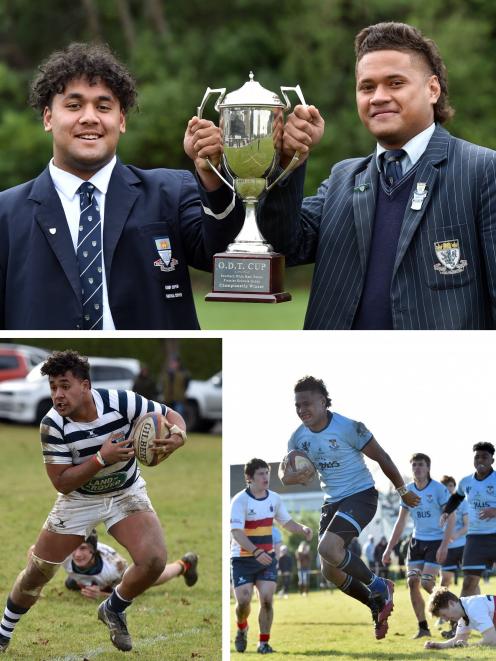 We will find out today when Semisi Tupou Taeiloa and Joji Buli bash into each other as the massive No 8s look to get an edge for their sides in the premiership final of the Otago Premier Schools competition.

Buli will hunker down at the boot of the King’s scrum, while Tupou Taeiloa will anchor the Otago Boys’ pack.

The robust duo have probably scored a couple of million tries between them this season.

The large young men more or less use their bodies like battering rams. But if they cannot bulldoze their way through the defence, both have shown an ability to skilfully offload and set someone else up.

The tournament has been a lot more even this season. There was very little between the top three teams.

Southland Boys’ played an exciting brand of rugby but was shaded 29-23 in the semifinal by King’s.

Buli was a stand out. The 18-year-old set up a couple of tries in a barnstorming game.

A modest young man, Buli is uncomfortable talking about himself. But he has set some lofty goals. He would like to play for the Highlanders and perhaps even the All Blacks one day.

But for now, the Fijian is really looking forward to running out at Forsyth Barr Stadium for the first time and, hopefully, inflicting another defeat on Otago Boys.

The sides have played twice this season.

Tupou Taeiloa is looking forward to the rematch as much as his hulking opponent.

The game will be broadcast live on Sky, but no spectators are allowed. Tupou Taeiloa believes that might be a small advantage for Otago Boys’.

"It is what it is, but I think it could be good for us because King’s always get up for crowds."

The 16-year-old is really looking forward to matching up against Buli again.

"It is good to go against, like, hard people so you can test yourself and see where you are at."

Tupou Taeiloa has another year left at school and he is keen to build on his form this year. He has not given his future aspirations much thought other than that.

In the middle four final, John McGlashan will host St Kevin’ and Wakatipu will host South Otago in the bottom four final.