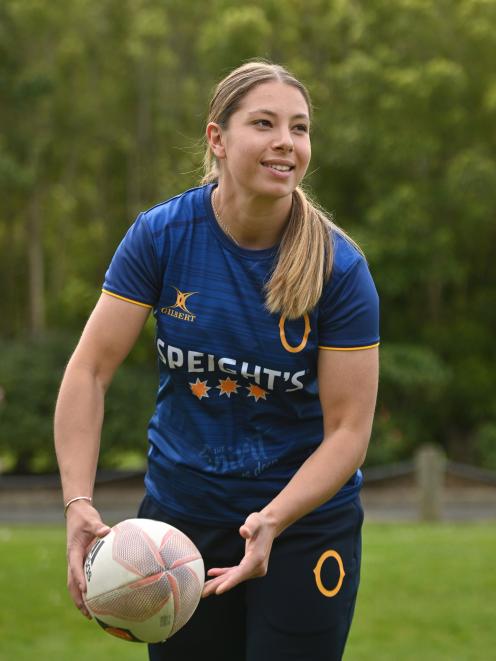 Tomorrow she will get her first start.

It has all come a lot quicker than the Otago Spirit centre had expected.

She was named in the No13 jersey for tomorrow’s match against the New Zealand Barbarians in Nelson.

It was another step forward after a big three weeks.

Last Saturday she made her first appearance for the side, being injected on the wing from the bench in a 34-15 win over the same opponent.

"That was a massive opportunity. I didn’t think would come so soon," she said of her debut.

"So I was really privileged to get out there and get some game time as well.

"I got put on to the wing, that was a bit of a shock, but I just absorbed it and really enjoyed it.

"It was a pretty unreal moment."

Now in her third week with the team, she was adjusting to the longer trainings, sometimes two a day.

However, she was enjoying good feedback from the coaches.

She was happy with her form as well, form which has propelled her into this week’s starting line-up.

"It’s a huge honour. I’m really looking forward to it.

"Centre’s obviously the position I love, so I’m really looking forward to it.

"I'm excited to get out there alongside Chelsea [Alley]. Obviously, she’s been a massive leader and has helped me a lot."

Du Plessis, who was born in South Africa and moved to New Zealand aged 7, said it was a step up from the Farah Palmer Cup.

But it was also just a game of rugby.

That was important to remember in everything.

While there was plenty to learn, she was still focusing on doing the things she was good at.

"I guess just absorbing everything, there’s been a lot of detail around structure and game plan.

"For me I’ve just got to focus on what I do well and back the skill set I have.

"I’m obviously here for a reason, just believe in yourself, but also absorb all the things in our structure and game plan."

As she did last week, Du Plessis will face three Spirit team mates in the New Zealand Barbarians side.

Kilisitina Moata’ane will start at second five-eighth, while loose forward Morgan Henderson and first five-eighth Rosie Kelly are on the bench.

Greer Holmes and Grace Steinmetz will debut for the Black Ferns at fullback and right wing respectively.