Dunedin out for redemption 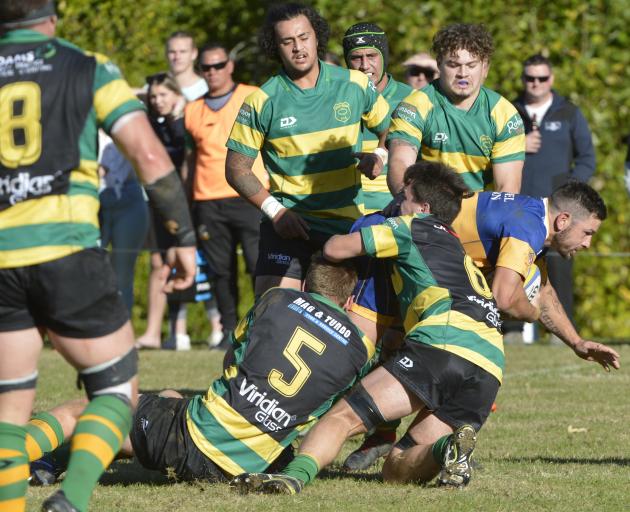 Dunedin's debrief at training on Tuesday involved a good dose of reality.

The Sharks suffered a 73-31 loss to Kaikorai at Kettle Park on Saturday.

The heavy defeat has left the 2013 champion marooned in the bottom half of the standings.

With just one win in four games, it has not been the start Dunedin was hoping for. But assistant coach Mike Maguire is confident his side can turn its season around.

"Obviously, it has been a tough few weeks,'' Maguire said.

"A very good Kaikorai team have exposed some of the flaws in our defensive system.

"We've reviewed it and talked about it and we trained well [on Tuesday night].

"But we've got a good group of players, so it is really about taking stock of where we are at four rounds into a 17-round competition. It is still early days.''

Dunedin was without talisman lock Mark Grieve-Dunn and quality prop Teague McElroy. The pair make a big difference to the scrum.

Grieve-Dunn returns for this afternoon's match against Green Island at Kettle Park but McElroy is still out. He suffered a head knock in the round two match against Alhambra-Union and is expected back for the round seven match against University.

The set piece, which has been a strength for Dunedin over the years, was a real let-down against Kaikorai.

The defensive structure was a big focus at training as you can imagine. Kaikorai ran in 11 tries so there was plenty of work to do.

Both aspects of Dunedin's game will be in for a stern test against Green Island. The Grizzlies posted wins against Alhambra-Union and Kaikorai before being edged 28-27 by Taieri at Miller Park.

Their scrum has been potent and the backline has more bite this season as well.

Maguire is hoping the short turnaround this week will work in his side's favour. Dunedin is hungry for redemption and is feeling "a lot better'' after its tough training session.

"We are hearing they are quite a slick unit. They are a quality team so we just have to be ready to rip into it.''

Co-champion Harbour has the bye this week. It is undefeated in four games and leads the standings with 18 points.

Southern, the only other unbeaten side, can reclaim the lead with a win against Alhambra-Union at the North Ground tonight.

Kaikorai will be confident of securing five points in its fixture against Zingari-Richmond at Bishopscourt.

And Taieri will host University in what shapes as the game of the round. University appears to be back on track following a slow start. But Taieri showed guts to prevail at Miller Park last weekend.