Wellington scored four tries to three, and played against 14 men for 20 minutes, but was foiled by a home team that, after the odd patchy spell, showed plenty of ticker on defence and composure in key moments.

The game was not officially part of the rejigged NPC, so it was the ideal opportunity for Otago to try a few things and give some new blood a chance to shine.

Anyone who has followed Dunedin premier rugby this year will not be surprised to hear that Cam Millar’s kicking was a major factor in the victory.

Millar, the 19-year-old Taieri first five, did not miss a shot, slotting four penalties - the best a 48m effort on the angle - and converting all three tries. 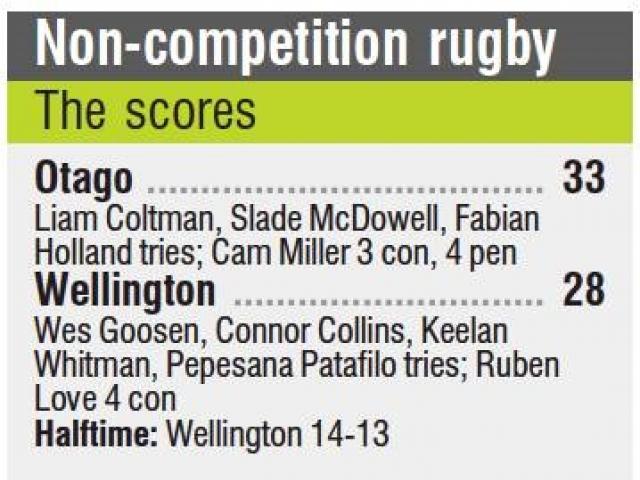 Likewise, those who have followed the development of towering teenaged lock Fabian Holland would merely have shrugged their shoulders when he scored a lovely try at a key moment in the second half.

Otago was clinging on to a two-point lead with a man off the field, and Wellington had its tail up.

Enter Holland, who scooped the ball from a ruck, looked up, saw an open field and galloped 25m for a try he will not soon forget.

While those two were being toasted, another youngster was licking his wounds.

Sean Withy had acquitted himself well on the openside flank in his first start for Otago, but blotted his copybook in the 58th minute when his head met Wes Goosen’s neck-head area, and the only result was going to be a red card.

For a "friendly", this was a game that packed plenty of intensity.

Both teams mixed enterprise with commitment, and if the execution on attack was occasionally skew-whiff, the application on defence and in the set phases was outstanding.

Otago had been rocked by a couple of scrums in the first half but it started the second spell with two monstrous efforts by the pack, and the home side also scored two tries from copybook lineout drives.

Liam Coltman, Josh Dickson and Christian Lio-Willie were prominent in the home pack, while Kayne Hammington was accurate and inventive at halfback.

Wellington led by a point at halftime, scoring two lovely tries - the first when Goosen won the race to a perfectly weighted Jackson Garden-Bachop grubber; the second by energetic halfback Connor Collins from a sizzling Peter Umaga-Jensen break.

But the Lions were erratic in the second half, and should really have made more of their long spell with a man advantage.

Otago rolls into the final round of the unusual NPC - it heads to Hamilton to play Waikato on Friday night - with three straight wins.

The Waikato game is effectively a dead rubber. Win or lose, Otago will head back to the North Island a week later to play Manawatu in a Championship semifinal.