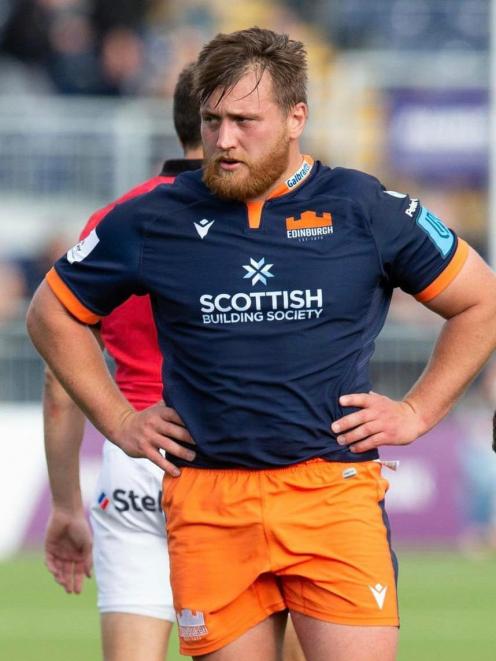 Former Otago University prop Angus Williams in action for Edinburgh recently. PHOTO: SUPPLIED
One day you are labouring on a work site overlooking Murrayfield and the next you are playing on it.

Well, actually there was more than a day in between, but for former Otago University prop Angus Williams, the journey picked up momentum following the initial lull of lockdown.

Williams notched up more than 100 club games for University and left Dunedin on a high in 2019.

The "Gus Bus" helped University seal a dramatic 38-31 win over Taieri in the premier club final when he drove over from close range in the last minute of the game.

Hard to top, but he has certainly done that. The 28-year-old has re-signed for Edinburgh for the 2022-23 season.

He made his debut for Edinburgh last year after impressing during a training stint with the team. But it was a lot of hard graft — literally.

Williams left Dunedin towards the end of 2019 bound for Hong Kong. He played rugby there for about "three or four months" then had a holiday in the United States before moving to Scotland.

His mother is Scottish and he was keen to visit his grandparents. He also had designs on playing top-level rugby.

He had signed with the Watsonians in the Super 6, but shortly after arriving in Scotland, the UK went into lockdown.

"During the lockdown, there wasn’t much happening in terms of rugby," he said.

Much of other work had dried up as well, but he nabbed a job as a labourer "which I actually really enjoyed".

"A bit of hard graft and it kept some money coming in as well."

During that time, he worked on the grounds of a house that overlooked Murrayfield.

"I knew there were opportunities with Edinburgh, so I was hoping if I played well then I could get involved with them, and it happened."

The Watsonians season was called off but Williams was called in to train with Edinburgh while the Scottish internationals were unavailable during the Six Nations.

"They needed some more front rowers, so they brought me in."

Initially he joined on a temporary contract for a few weeks, but impressed and made his debut in an away victory against Connacht in March 2021.

He was upgraded to a professional contract in February this year.

Edinburgh has made it through to the quarterfinals of the United Rugby Championship and will play the Stormers in Cape Town on June 5.

"It is a great competition. It is a very high standard. Obviously it is a bit different from how we play back home.

His thoughts are never too far away from home, though.

He made his debut for University in "maybe 2012 or 2013 and I really enjoyed playing for them".

"It is a great club and an awesome bunch of lads. I had some really good times.

"That [2019 final] was a good memory to go out on. Obviously I played my 100th game that year and scoring in the final was pretty awesome as well.

"I’m always checking up on the scores and seeing how the Uni boys are doing.

"I still know a few boys that are back playing there, so it is always good to check in and see how they are going.

"Tough start this year, but they will build."