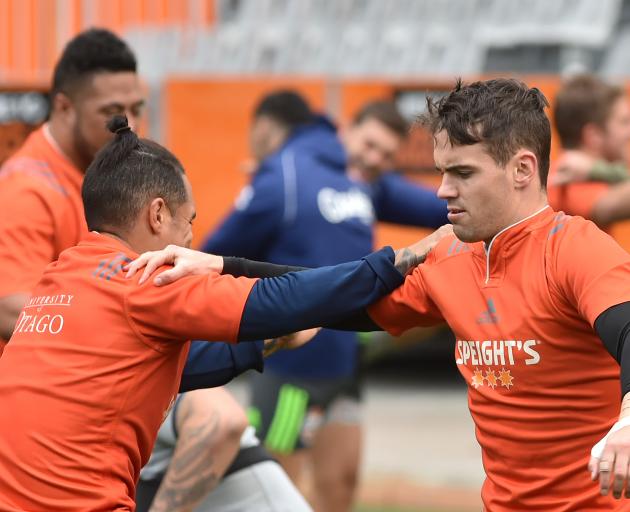 Highlanders first five-eighth Fletcher Smith (R) warms up for training with halfback Aaron Smith at Forsyth Barr Stadium yesterday. Photo: Gregor Richardson
When Grant Fox used to wear the No 10 jersey, he was always the favourite of the laundry lady.

Fox, who played in the champion Auckland side of the 1980s-90s, barely got his jersey dirty. For him, making a tackle was as rare as tasting a defeat - it simply did not happen.

But times have changed. The game has become more rounded and first five-eighths have to possess a defensive game.

Highlanders first five-eighth Fletcher Smith says the days of the No 10 not tackling have gone.

He puts a lot of work into his defence and he felt he was making progress.

``I think it is about confidence ... I get some of the big boys over at practice and put a few shots on them. Obviously I am not going to make too many dominant tackles. But it is about wrapping them up and doing my job,'' he said.

``Everyone sees a small 10 and they are going to run at you. I'm sitting around 86kg. It is hard but it is what it is. A lot of 10s are like that but that is a big part of the game, running down that channel.''

Smith played all but 10 minutes of the side's last game against the Chiefs, after Lima Sopoaga was forced off the field because of a foot injury.

He was happy with his performance in Hamilton, if not the result, as the Chiefs won a close one 27-22.

``Obviously I did not expect to get on so early. You never want to see your mates go down so early. But I enjoyed the minutes out there and it felt pretty comfortable.

``If you do the preparation throughout the week, then you feel pretty comfortable when you go out to play.''

He felt the side just needed to get more territory and take the chances that came along and would try to do that when the Brumbies came to Forsyth Barr Stadium on Saturday night.

Smith (23) has six papers to go to complete a commerce degree but is concentrating on his rugby this year.

He said a lot of work in the third year was group assignments and that was hard to do with rugby commitments.

He would head to Waikato for the Mitre 10 Cup and was looking forward to the job.

``I just needed a bit of a change. I've got a few mates up there. Jack Stratton I played with in Canterbury.

''I just wanted to change my environment and get a new challenge. I have spent the past five years in Dunedin and with new coaches and new players. That's something to look forward to.''