Breen making most of chances for Northland 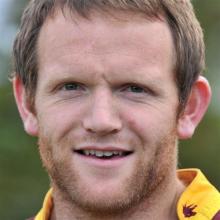 Peter Breen.
One Northland player will feel right at home under the roof at Forsyth Barr Stadium tonight.

Northland first five-eighth Peter Breen will play in the pivot role for his new province having shifted north from Otago in the off-season.

Breen (27) said he was enjoying his time in Northland and his rugby appeared to be profiting.

"Otago had signed Hayden Parker and Fletcher Smith as their no10s and they are both quality first fives. I wanted to get some game time and there was an opportunity up here for a No10," he said.

"It was a tough decision to come up, leaving friends and family but I had had a couple of years behind Hayden Parker and I just needed to get game time. I just thought I would come up here and see what would happen."

Breen, who made his debut for Otago in 2012 and has played 44 games for the blue and golds, joined the Old Boys-Marist club in Whangarei and it had worked out well in that regard with the side winning the club title.

He also joined the Blues for the final part of the season.

"I had the last four weeks with the Blues and that was great. Tana [Umaga] is such a good coach. I was in the Blues development side and we beat the Chiefs development team twice and the Hurricanes.

"I have wanted to make the step up to Super rugby and the only way to do that is to play at No10 for a team."

Breen will be a key man for Northland tonight and said the side was not far away despite opening the season with two losses.

"Against Manawatu we had a real chance and gave ourselves an opportunity to win. Against Auckland we probably did not play that well and they had a lot of the ball.

"We are coming down with an attacking mindset. If we put it all out on the park and stay in our systems. The key for us is staying in the game and putting ourselves in the position to win the game."

Having played plenty of games under the roof, Breen said the game was bound to be fast and the side would have to defuse Otago’s kicking game.

Northland did not win a game last season but Breen said that statistic was not hanging over the side.

"It’s pretty much a new team, to be honest, so there is not much talk about that. It has not really been spoken about. It’s about putting things together this year."

"It will be good to catch up with family and friends but we’ve got a job to do first."

The couple have been doing up houses over the years and have a small property portfolio.

Breen said he had no plan beyond the end of this season but the goal was to play Super rugby.