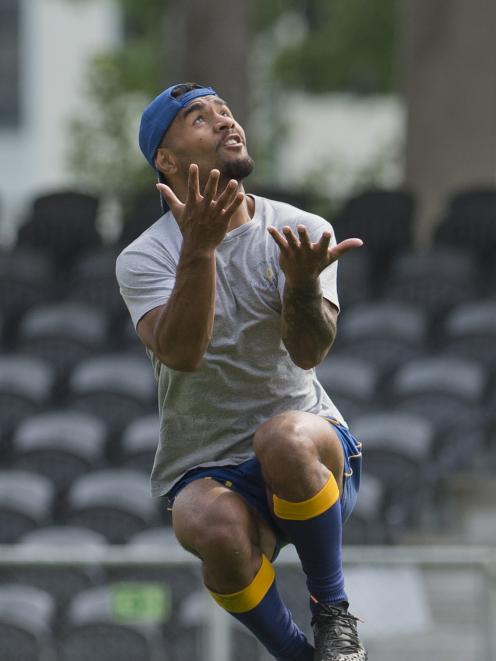 Otago winger Jona Nareki flies high when trying to catch a ball at training at Forsyth Barr Stadium yesterday. PHOTO: GERARD O’BRIEN
Jona Nareki is back at home in the place he loves. So look out Northland.

Nareki will line up on the left wing tonight when Otago takes on Northland in a Mitre 10 Cup championships semifinal.

The energetic outside back has been a real jack-in-the-box this season, on both sides of the game — making some breaks on attack while hitting hard in defence.

Nareki said although it has been a long season he was looking to go out with a bang.

"I’m feeling pretty good. I got my rest two weeks ago so I was pretty happy to be back to play in the Tasman game," she said.

"It is a bonus [having a rest]. Mentally it is good. Have some time away as you do play a lot of rugby. I have had a few niggles and just recovered now through to the finals."

One of those injuries was a blow to the ribs which has been bothering him for most of the year and he picked up a good shot to the ribs in the victory against Canterbury.

"It’s been a pretty full on year. Just the fact we had the Super Rugby Aotearoa and we had games against each other. It was brutal at times. Had a wee break and back into Mitre 10 Cup now.

"Now I know how important recovery is. Just do it straight away after a game. Hydrate with the right liquids straight after a game with water and Powerade. Lots of that, not much Speight’s. Then a swim in the afternoon, the next day and usually massage. It makes a massive difference. I tried to, one time, not do it but the body felt like it had hit a brick wall."

Nareki had been a livewire for Otago since he made his debut in 2017. In the first three seasons for the side he scored 24 tries in 30 games.

But he has not scored a try all season. Last week, he could have scored but passed the ball to halfback Kayne Hammington with the tryline just metres away and no defender in front of him.

Nareki though was just being an unselfish team mate.

"It doesn’t worry me [not haven’t scored a try] but I suppose it is part of your job description. As long as you are setting them up, then it’s all right."

Nareki (22) will play his 40th game for Otago today and a goal was to play 50 games for Otago and also the Highlanders.

He was expecting Northland to move the ball around and get some continuity into its game.

"That is what we like on this ground with our speed. We did not get much ball last time against Tasman for us outsides. We need to make the most of the opportunities. We just love the stadium, love it."

Nareki will be important tonight as opportunities must be taken. Otago has been off form over the past couple of weeks and lacking accuracy. Northland will not be as generous as the last time it visited the stadium, just under a month ago, when it dropped everything on offer and was well off the pace.