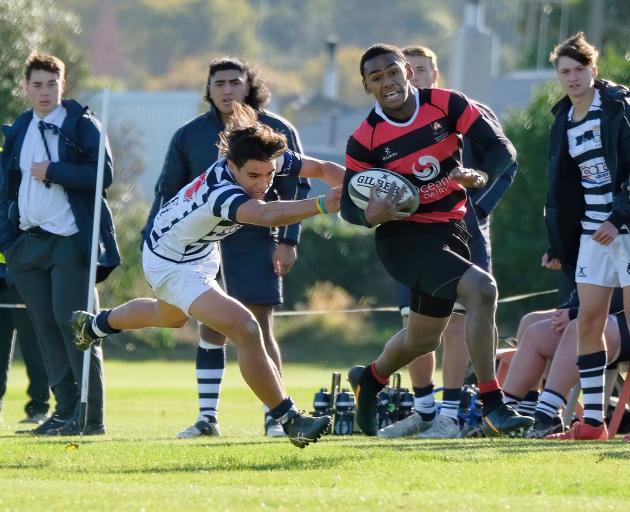 Waitaki Boys’ winger Simione Toganivalu tries to get around Otago Boys’ defender Manaia Lesa during the Otago Schools Rugby Championship game in Oamaru on Saturday. PHOTO: DAVE BOYLE/SPORTS IMAGE NZ
Waitaki Boys’ High School gave itself a chance to pull off an upset that would have thrown the Otago Schools Rugby Championship pecking order out the window.

The home side trailed Otago Boys’ High School 22-13 heading into the final 20 minutes of the game in Oamaru.

But a nice try to winger Simione Toganivalu set up a tense finish.

Waitaki had some late opportunities but lacked composure in the big moments and victory slipped away.

Otago Boys’ eventually won 22-20. But it was beaten 24-0 by Southland Boys’ midweek, and the narrow win over Waitaki Boys’ is perhaps an indication the defending champion is off the pace this season.

Otago Boys’ led 14-13 at halftime and increased the lead through an unconverted try to a penalty to Joe Parkinson.

Waitaki Boys’ manager Roger van Booma said the Oamaru school had nine debutants and it was an impressive outing for the team.

"We were really excited to see that when we play at our best, we can compete [with the stronger teams]," he said.

"We had two or three opportunities ... but maybe we panicked a bit and their defence was really good at the end."

Centre Tarras Beardsmore led the Waitaki defensive effort with some telling tackles, while openside Lochie Mavor also got through a lot of work on defence and was a tiger over the ball.

"Lochie just went for it all day. He tried to pinch everything and made some great tackles. And Simione getting that try in the 50th minute was just great for him."