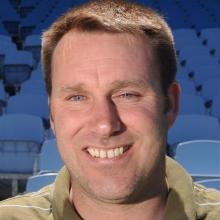 Coryn Huddy.
Coryn Huddy has spent eight years as a key figure at Forsyth Barr Stadium - now he will manage one of the teams that plays at it.

He was yesterday confirmed as the Otago rugby team's new manager.

Bringing a raft of experience, he takes over from Grant Hubbard, who left the role after six years.

Most recently Huddy has been the chief operating officer at Dunedin Venues Management Ltd and was previously its operations manager.

For the eight years before to that he was operations manager at the Otago Rugby Football Union. Included in that was groundsman work at both venues.

It was that experience that ORFU general manager Richard Kinley said was key to Huddy's appointment.

"Coryn has had extensive experience in logistics and organising with his role at Dunedin Venues with test matches and major concerts.

"So he brings a very strong logistics management to our organisation, which will be great.

"Also through his role with the venue he has strong rugby networks throughout the country, which brings another strength."

He said there was a "good number of applicants" and the calibre had been exceptional.

The role was a part-time, fixed term one.

It would be at its busiest through the Mitre 10 Cup campaign, which begins with warm-up games in August and concludes in October.

However, there was still work to be done in the lead in.

The main role was to work closely with the coaches and handle all off-field matters.

That included both the logistical side of things, as well as helping the players develop in their off-field roles too.

The move comes as a result of Hubbard moving on after six years.

"He's the only manager I've known since I've been here, so we're sorry to see I'm go and we wish him all the best," Kinley said.

"It's just an opportunity now for someone to add their flavour, I suppose, as Grant did.

"He was pretty well liked, very outgoing and good at relationship-management.

"Personally I've got a lot of time for him, so I keep in touch with him."

Huddy did not respond to calls from the Otago Daily Times yesterday.