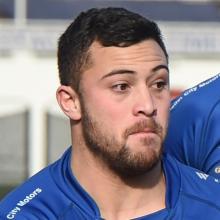 Morris-Lome (26) has signed with the New England Free Jacks in Major League Rugby in the United States.

Morris-Lome will play the 2021 and 2022 seasons with the Martin-coached Free Jacks.

“I’m super excited to get over to New England and join the team,” Morris-Lome said.

“Looking forward to linking up with coach Ryan again, and working with the members of the awesome squad they’ve put together.

"I can’t wait to do my best to contribute to the Free Jacks and New England rugby community.”

Morris-Lome was part of a strong Otago Boys’ High School First XV which made the national top-four final in 2012, losing to St Kentigern College. The side was coached by Martin.

Morris-Lome played for Harbour but then made the trip south and made his first-class debut for Southland in 2017.

In 2017-18, he made 17 appearance for Southland but returned to Dunedin last year.

A couple of injuries to other players led to him being picked for Otago. He grabbed the chance with both hands and ended up playing in every match for Otago in the Mitre 10 Cup, scoring five tries.

Morris-Lome, who has completed a building apprenticeship, trained with the Highlanders earlier this year but has been injured with a finger injury over the past couple of months.

Martin, who has signed a three-year deal to coach the Free Jacks and will mix that job with his role as assistant Otago coach, is xcited to get Morris-Lome to join the USA club.

“Aleki is a super-electric midfield back who possesses the ability to tear opposition defences apart with his fend-speed combo,” Martin said.

“He is a brutal defender who loves big contacts and reads the game incredibly well. Leks has had to work hard to get to where he is and I look forward to seeing him impart his talents and knowledge among the squad in New England.”