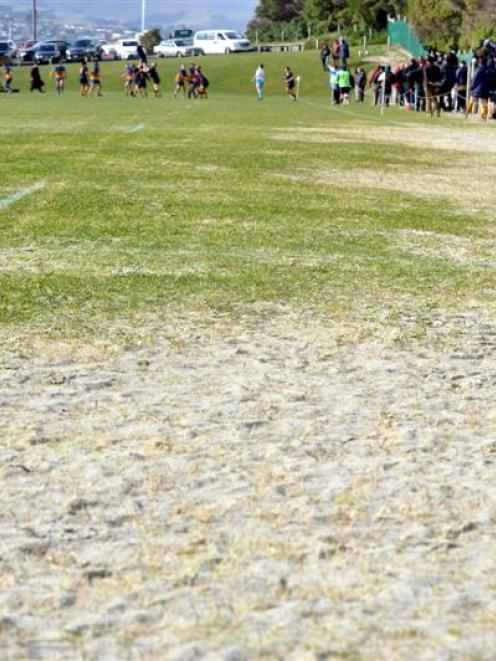 The southeast corner of the No 1 ground at Kettle Park is covered by sand. Photo by Christine O'Connor.
The Dunedin Rugby Football Club has made no decision on where its future lies but its training lights have been out of use because of costal erosion and sand is encroaching on to its main ground.

The club, with seven senior teams the biggest in Dunedin, is housed at Kettle Park, which appears to be under threat from the sand dunes disappearing due to coastal erosion.

On the No 1 ground, the ball when kicked out on the sea side, now ends up down on the beach as the dunes have been eroded away and the vegetation which used to sit on the dunes has long gone.

Sand sits on the southeastern corner of the No 1 ground and is encroaching over time.

The Dunedin City Council said at a committee meeting yesterday it would repair and replace sand sausages along the dunes and also install reno mattresses - rock and wire structures - at Middle Beach in the medium term to reduce erosion.

A long-term solution to the issue was still being considered,Dunedin club committee member Ross O'Connell said the club was still waiting to hear advice from the Dunedin City Council on its long-term future.

''It has never been discussed at a committee level whether we have to move or even if we have to think about moving,'' he said.

''People have different views and there have been plenty of conversations around bar leaners. But nothing has ever been formally discussed.''

The club though is hampered by an inability to use a series of training lights on one of its fields.

The wires for the lights have been exposed as the dunes have disappeared and cannot be used so the lights are out of use.

This has been a sporadic problem over the past few years and a severe storm about six weeks ago had eroded some dunes and put the lights out of action since then.

It was not a major inconvenience but when three teams want to train at night, and there is only one ground for training, teams do not have a lot of ground to train on.

The question remained where the club would move to, if it was forced to shift.

With four colts teams, mainly made up of tertiary students, a move to somewhere like Logan Park has been suggested but O'Connell said it was not as simple as that.

''We have something of an identity issue. We have the buildings at Kettle Park, the grounds there, people identify with the ground. That is who you are.''

The sand on the southeastern corner of the main ground was not a big problem but it would be good for it to be removed, he said.

Players struggled to run in the sand and scrums were hard to manage in it.