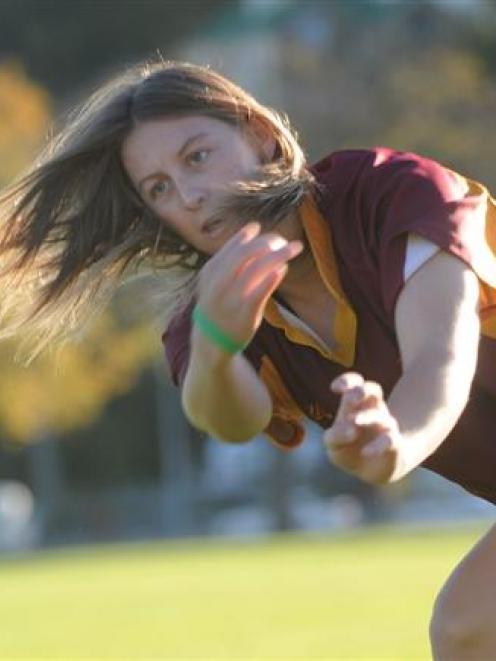 Kelly Brazier trains at the Oval yesterday. Photo by Craig Baxter.
Kelly Brazier entered New Zealand rugby's record books on Saturday when she scored 64 points for Alhambra-Union in the women's premier match against Kaikorai at the Oval.

It is believed to be a record individual points score in a women's rugby match in New Zealand.

New Zealand rugby historian Ron Palenski, of Dunedin, said he did not know of a higher points score in women's rugby.

Her score could have been higher but fellow team member Charlotte Brock also took the goal kicks and landed five conversions.

"It's pretty cool. I'm pleased about it," Brazier told the Otago Daily Times.

"I had to work hard for some of the tries, but it was not one of the hardest games I've had."

Brazier, who started playing rugby at the age of 6, did not realise how many points she had scored until after the match.

She has scored 118 points for her club in three matches this season.

Her other tallies were 16 in the 31-5 win against Pirates, and 38 in the 83-0 win over the Invercargill club of Collegiate.

Brazier first played for the Otago Spirit team as a 15-year-old when she was a pupil at Otago Girls High School and has been a regular in the team for the last four years.

Many of the major scoring records in New Zealand rugby have involved Otago or players with Otago links.

According to the Encyclopedia of New Zealand Rugby, the highest individual tally is the 87 points scored by Roy Nieper for Caversham Primary School against North East Valley in 1927.

At that time tries were worth only three points.

The second-highest is believed to be the 66 points scored by former Otago All Black Jeff Wilson, for Cargill High School against James Hargest in 1992.

Tries were worth four points at the time.

Former Highlanders first five-eighth Simon Culhane holds the All Black record of 45 points - a try and 20 conversions - against Japan in the 1995 World Cup.

The record for New Zealand women's representative domestic rugby is 42 scored by Annaleah Rush (Otago) against the Hanan Shield Districts team in 1999.

She bagged eight tries and kicked one conversion.

Gavin Lawless (Sharks) still holds the record in Super rugby after scoring 50 in the 75-43 win against the Highlanders in Durban in 1997.

The highest tally in Dunedin premier men's rugby is the 42 scored by Guy Curtis (University A) in the 97-6 win over Southern at Carisbrook in 1993.

Brazier has played for the New Zealand touch team for the past two years.

Her next target is to make the Back Ferns for the tour of England this year and next year's women's World Cup.