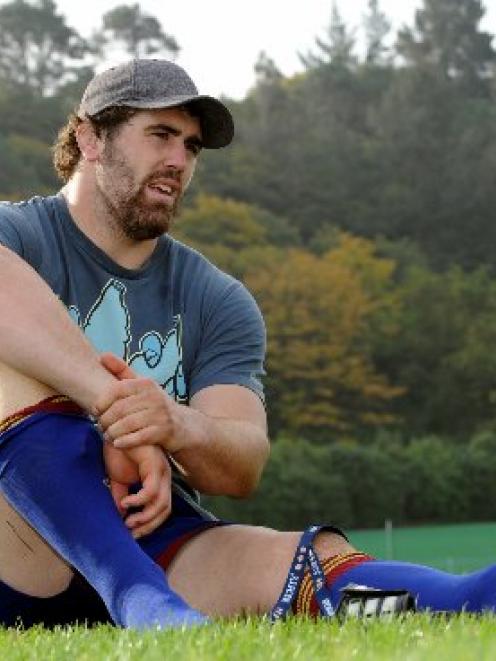 Jamie Mackintosh. Photo by Peter McIntosh.
In a sense, it is a meeting of two over-achievers.

In one corner are the Highlanders, happily ensconced in the top half of the table with five wins in the bank as the competition reaches its halfway stage.

In the other corner are the new boys on the block, the Melbourne Rebels, tipped to go winless this season but already with three victories to their name.

Highlanders captain Jamie Mackintosh acknowledges the teams are similar in a lot of ways.

"They are building a new culture there with a lot of guys who are not from the city. Starting out fresh with new management and new players," Mackintosh said.

"That is sort of like what we have here. We are trying to gain a bit of respect out there with a lot of new players."

Mackintosh and his troops will have to be on alert tonight as the Rebels have shown a Jekyll and Hyde personality in many of their games.

They were utterly awful at the beginning of the game against the Hurricanes, conceding three tries in the first 20 minutes, but then came fighting back to put 43 points past the hapless Hurricanes.

"They have the ability to trigger a 40-point turnaround so have to be watched. They will never be out of the game.

"Last week we made 21 line breaks which showed we put them [the Cheetahs] under a lot of pressure. But we have talked about not showing enough respect for the ball. It was the style we wanted to play, giving the ball a bit of width and finding the space, but we didn't always execute it right.

"We've learned a lot from that game and know we have to get it right against the Rebels.

"We know with the set piece we've just got to keep plugging away. With things like the lineout we are getting different things wrong. We'll be winning ball and then not getting it to the halfback properly. The scrum, we've had better games and bad games. We need to get more consistency into our game.

"It was good last week in that we found the space and were able to communicate to get players into space. But we just maybe have to be bit more direct and show some more structure."

Both sides have won their past two games, with the Rebels beating the Hurricanes and the Force over the past couple of weeks.

The Highlanders have squeaked past the Brumbies and Cheetahs over the past fortnight and will not want a repeat of their performance against the Cheetahs, where they threw the ball all over the park but got untidy, catching a dose of white line fever.

Highlanders coach Jamie Joseph will be instilling the need for his players to get back to playing more structured rugby and forget about the loose stuff.

The Rebels are very much a confidence team and need to be knocked down early and for a lengthy period to put them off their game.

Aaron Smith gets his first start at halfback at this level and his speed around the ruck will be a real asset against the Rebels.

Joseph said Jimmy Cowan needed to freshen up and Smith would suit the Highlanders' game.

The Highlanders play four New Zealand teams in a row after this game, which will make or break their fate in the playoffs.

The Rebels have opted to put the returning Mark Gerrard at centre, not his normal fullback position, and big prop Rodney Blake gets a start.

Former Highlander Hoani Macdonald will start from the bench.