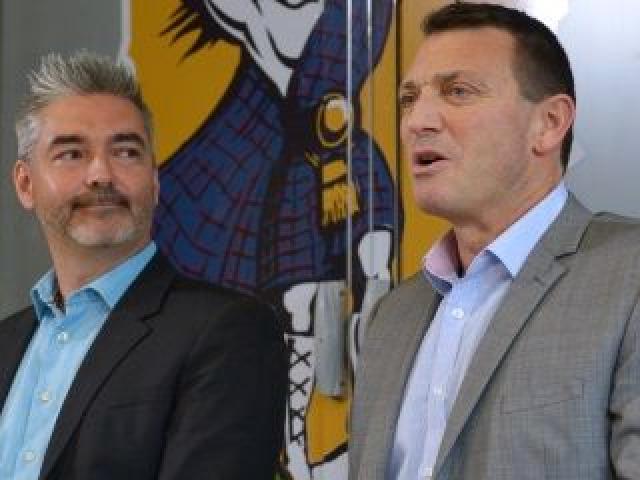 The head of the new Highlanders licence-holder's group, Dunedin businessman Matthew Davey (left), and the franchise's general manager, Roger Clark, address the media at a press conference announcing the change of ownership in Dunedin yesterday. Photo by Gerard O'Brien.

The Highlanders have new operators.

A consortium of mainly South Island investors has been successful in securing a five-year licence to operate the franchise until 2020.

The group, headed by Dunedin businessman Matthew Davey, has taken a 77% stake in the franchise.

Otago, Southland and North Otago provincial unions have a 13% stake and New Zealand Rugby (NZR) will keep a 10% share for the first two years of the licence.

The Invercargill City Council has underwritten the venture to the tune of up to $500,000 in return for one guaranteed game at Rugby Park each year for the next five years.

The licensee will be responsible for marketing and administration and will manage the team.

In return it will keep gate and sponsorship income.

NZR will retain ownership of the brand and will continue to pay the players' salaries and fund two coaching positions through broadcasting revenue.

It will also cover all regular-season travel and accommodation costs.

It is unclear how much money changed hands.

NZR general manager of relationship, planning on operations, Nigel Cass would only say the deal was ''comparable'' with the agreements reached with the other four New Zealand Super rugby licensees.

Those deals are believed to have ranged between $3 million and $4 million.

''They key thing from our side is it does bring in capital, it does mean that the Highlanders will be able to look at innovation and doing things which will hopefully secure the future success of the team,'' Cass said.

''I know Roger [Clark, Highlanders general manager] has done phenomenally well with relatively [few resources]. So, hopefully, this will redress that balance a little.''

Davey, who is the founder and chief executive of Ticket Direct, described the acquisition as a ''fantastic business opportunity'' and as ''a passion of the heart''.

''We see the real opportunity as [being] around our partnerships,'' Davey said.

''That is what really excites me. I've created my business here and kept it based in Dunedin for the past 16 years.

''And the ability to work with everybody from the DCC, who have given us the most amazing stadium in the country, through to the Invercargill City Council ... means that we can draw upon the strengths of the South and do even more with the Highlanders.''

Ask if he thought the venture would prove profitable, Davey responded, ''I would hope so. Yes.''

He later added a significant commercial announcement would be revealed next week.

Cass confirmed the Highlanders had expressions of interest from ''around the world'' including a group from Singapore.

''It is fair to say we were a long way down the path with a Singaporean consortium ... but ultimately that didn't get across the line and we are very excited that the consortium that we are announcing today is, primarily, as I've said, South Island based.''

Clark has been retained as the person charged with running the Highlanders franchise day to day and his job title has been upgraded from general manager to chief executive.

A group of private investors have secured a five-year licence to operate the Highlanders.

The group has taken a 77% share in the franchise.

It will be responsible for marketing, administration and managing the franchise.

It will keep the gate takings and sponsorship income.

NZR owns the brand and will pay the players.

It will also cover travel and accommodation expenses.

Highlanders will play at least one game in Invercargill each year for the next five years.