Rugby: Not time for Highlanders to panic 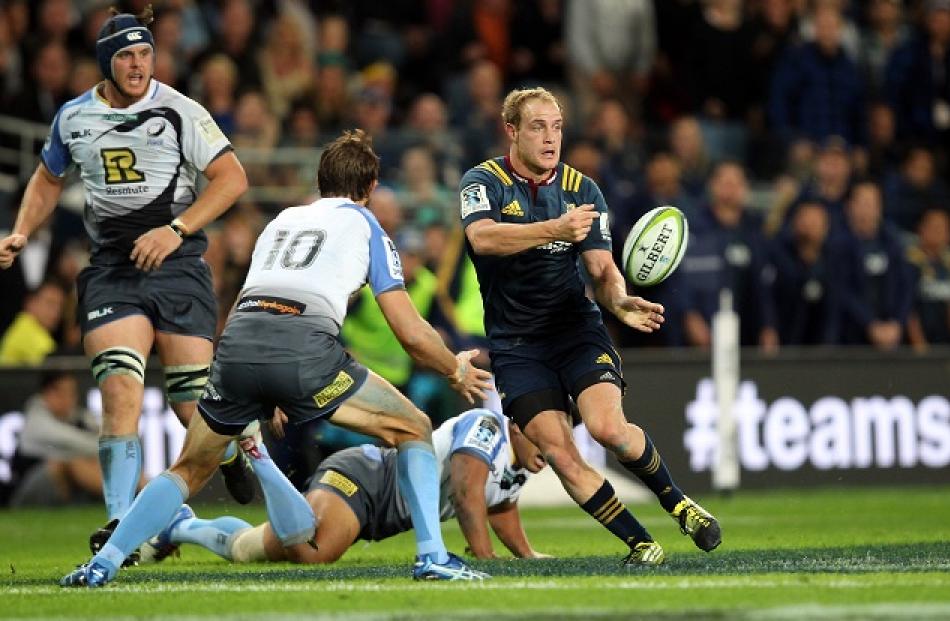 It is not time to panic yet, but there is a sense of urgency surrounding the Highlanders' season. After such a promising start, they are barely clinging to a playoff spot after slumping to a five-win, three-loss record.

It is now over a month since they delivered a quality performance, and the gameplan that was working has gone out the window.

Through that winning period they followed a pattern that made them a dangerous team, but in the past month they have adopted a more open approach, which can work but is hard to pull off.

Whatever tactic you use, you have to be accurate, and at the moment the Highlanders' gameplan is one that is hard to be accurate with.

Pressure is the key.

Not only are they putting themselves under pressure with forced passes and offloads, the Highlanders are often running at a defence that is under little pressure itself.

At this level you do not expect players to fall off tackles. You have to get them out of position by forcing them to reorganise by moving backwards and sideways. That reorganisation is hard to do well when the opposition is getting quick ball. You have little time to ensure your line is set with everyone in the right place, making it more likely gaps will open up.

But you have to create that pressure and looking to attack from the get-go is not doing it. The Highlanders are running at defensive lines which are set and not on the back foot, meaning they can come up fast, shut down space and put the Highlanders under pressure. That makes simple things such as catching and passing that little bit harder, along with making it harder to break the line.

In the past three games the Highlanders have turned the ball over 65 times, mostly from dropped balls, too many of which have come from them putting themselves under unnecessary pressure.

Attacking early works once in a while, but in general they are not good enough to play this way, as is the case with most teams.

That is not to say they cannot play the open game, but there is a time and place for it. Picking their moments and being able to flick the switch to bring it out when it is required is a much better approach.

Building pressure is a good start, whether it be with the boot or with ball in hand. Throughout the middle of their win-streak they kicked accurately and chased hard, applying pressure that way.

Teams struggled to get out of their own half and the Highlanders either won the ball back in the air, or made the tackle before a counterattack could be launched.

From there the defensive line was able to set while still going forward and the opposition support was still getting back. They were then able to use their quick linespeed to get up and stop their opposition behind the gain line. They did that for multiple phases, with the opposition going nowhere and eventually making a mistake, or kicking. That meant they were rarely defending deep in their half and were getting the ball back in better positions to launch an attack from.

With ball in hand they look better after having strung together a few phases. The tactic of setting a ruck wide on the opposite side of the field from first phase, before coming back with two or three narrower ones and then going wide to the other wing was an effective one. It spread the opposition-defence out and meant at some point you were likely to get backs running at forwards.

It also meant that they could set rucks and force the defence to reset across the whole width of the field, something they took advantage of.

The catch was they could not try to do too much. Malakai Fekitoa and Patrick Osborne are dangerous in space and it must be tempting to try to put them away early. But that can lead to forced passes, dropped balls and the system breaking down before it has even begun. After they figured that out and just looked to get go-forward out of those players initially, they had a good platform set.

With some dangerous ball-carriers in the forwards, the Highlanders could keep gaining forward momentum, while a hard-working pack helped them get quick ball. This made them a hard team to for defences to remain organised against and with so many devastating attacking players, tries were inevitable.

Of course you cannot to cling to one pattern for too long; teams will figure it out and counter it. But the basic idea of applying pressure to create space needs to remain.

A hallmark of the Highlanders' wins was that they made more tackles than their opposition. Against the Reds the two teams' tackle count was similar, while against the Sharks they made significantly fewer. Perhaps that is where they should focus. They are a strong defensive team and need to back themselves in that area. Likewise they have often looked better on attack with less ball. The key is the quality of that ball, rather than the quantity.

The good news is this team is still capable of winning the competition. But they will want to sort out their problems quickly. Accuracy is key, but a few tweaks might just make a world of difference.