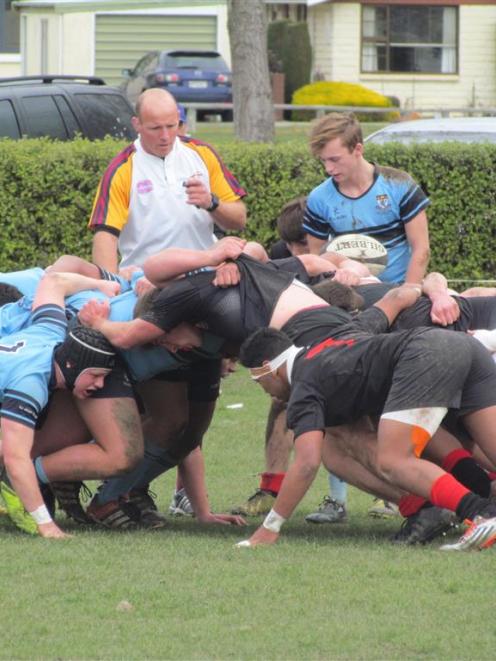 Referee Nick Webster stands by as a scrum is set during the Otago First XV semifinal between Waitaki Boys’ High School and King’s High School, at Milner Park in Oamaru on Saturday. Photo by Hayden Meikle.
John McGlashan College held firm to grind out a 16-3 win over Otago Boys' High School Second XV on Saturday and book a place in next week's final of the premier schools competition.

In dreadful conditions, McGlashan's First XV held out a strong finish from the Otago Boys' side to keep its line intact and record a deserved two-tries-to-none victory on its home turf.

McGlashan coach John Kyle said the win was based on stoic defence and a strong performance from its loose forward trio of Rory and Leroy Ferguson and Henry Bell.

The trio made countless hit-ups and put in a huge defensive effort, and Rory Ferguson also claimed both of McGlashan's tries.

The match was played in driving rain and wind, which arrived just before kickoff.

"It blew through just as we were warming up, which changed the conditions drastically and forced us to change our game plan,'' Kyle said.

"They attacked our line for long periods in the second half and didn't get over, so we were pleased about that.''

McGlashan took an 8-3 lead into halftime.

Otago Boys' coach John Faulks said both backlines tackled well and the forward packs were evenly matched, with one exception.

"One try was scored from a pick-and-go and Rory scored one good individual try for them and he was the difference, really.

"It was a day for forwards. Our boys turned down a couple of penalties in the end trying to score a couple of tries as well, so it was probably a little closer than the score indicates.''

Waitaki Boys' scored four first-half tries with the wind at its back to lead 26-12 at the break, before the heavens opened up five minutes into the second spell.

"We just weren't sure what was going to happen with the weather. That's why we took it to them in the first half, when we had the chance,'' Waitaki Boys' coach Wayne Kinzett said.

"The second half was really defensive. We couldn't throw the ball too hard or too wide.

"They took it to us with their pick-and-go and we gave away a few penalties which let them in, but I still thought we were in control because we had a big enough lead.''

Openside flanker Sailosi Vea scored two tries and was the standout player for the home side.