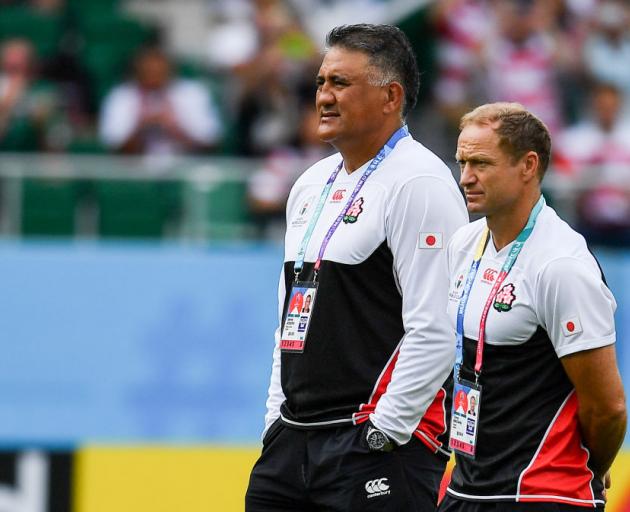 Japan head coach Jamie Joseph and attack coach Tony Brown. Photo: Getty Images
Japan coach Jamie Joseph said his side's thrilling, speedy brand of rugby was down to their intensive preparation and their trust in the gameplan as they beat Scotland on Sunday to reach the World Cup quarter-finals for the first time.

Their speed in attack has become a Brave Blossoms trademark since Joseph took over in 2016, but the former Highlanders coach, who was joined by fellow Otago alumni Tony Brown, was just as pleased with his team’s defensive work against Scotland.

"I think the word attack is often reflected in when we have the ball but we are an attacking team on defence as well," said Joseph.

"What is often talked about is where the tries came from but what I remember is our really attacking defence line that created opportunities through turnovers that then created tries." 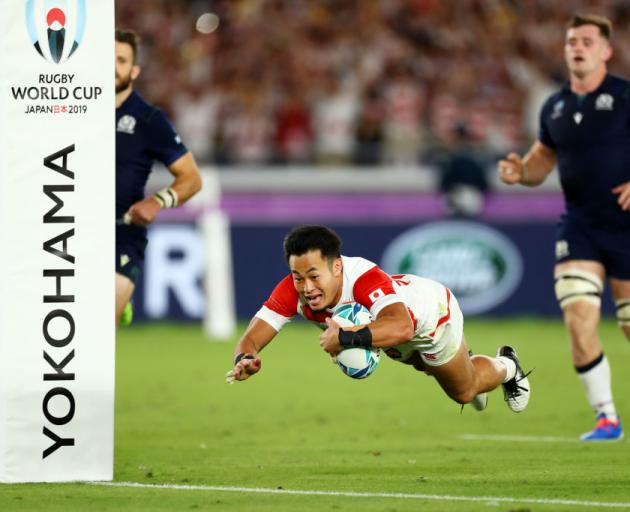 Kenki Fukuoka of Japan runs with the ball on his way to scoring a try during the second half of the match against Scotland. Photo: Getty Images
Joseph has had his players in camp since January and with four wins from four so far at this World Cup, it is clear Japan had a plan to exploit the weaknesses of all their Pool A opponents.

"We wanted to attack certain areas and certain players to try and get in behind because we felt when we did that we would put pressure on them there," said Joseph.

"Trusting the plan is what saw us through. The players need to take the credit for trusting each other, trusting what we had trained for and planned. That was the difference in the end."

Scotland coach Gregor Townsend, whose team failed to qualify for the World Cup's knockout stage for only the second time, praised the preparation of the tournament hosts.

"They are a cohesive group. You can tell that they have been together for a long time and they know the team they play, which suits their strengths," he said.

Wingers Kotaro Matsushima and Kenki Fukuoka scored three of Japan’s four tries, showing pace and vision on the outside that Scotland could not match.

"They play a really fast game and creating quick ball at the ruck is probably the biggest part of their game," added Townsend.

"They have some players with real pace and confidence just now. If you look at the players in that backline they have real confidence and a confidence to try things."

Japan captain Michael Leitch said in the tournament's build-up that they were aiming to win the competition on home soil and while that was ridiculed at the time, the statement does not seem as outrageous heading into the final eight.

In qualifying for the quarter-finals, Japan have become the first team from Asia to reach the knockout stage and only the fourth tier-two nation to achieve that feat.

"This is great for Japanese rugby, for rugby in Asia and for tier-two rugby," said Leitch. 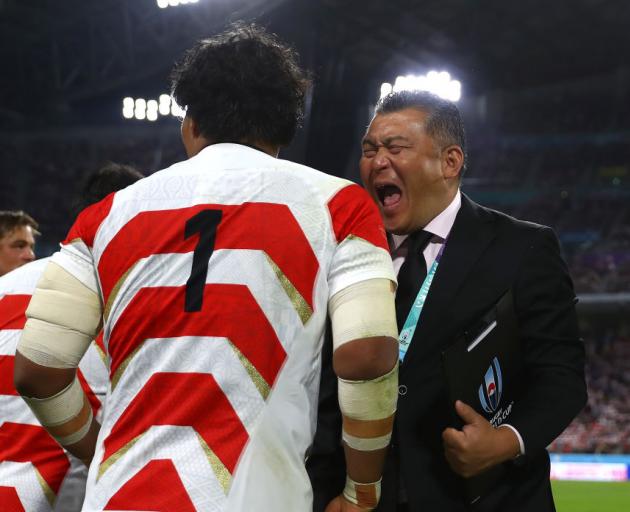 Jamie Joseph celebrates after the team's victory against Samoa. Photo: Getty Images
"First we have qualified for the quarter-finals and now we are shuffling the goalposts (of what can be expected)."

Leitch believes the players' exposure to the world’s elite, both at international level and for the Sunwolves in Super Rugby, has been a huge factor in Japan’s improvement.

"The biggest reason is belief, that is the trigger," said Leitch.

"Since 2011, the opponents we have played have been stronger and stronger. We have played more tier-one nations and played in Super Rugby."

Next up for Japan is South Africa, whom they famously beat in the 2015 World Cup, but also lost to 41-7 in a tournament warm-up last month.

Expectancy levels in Japan will shoot up and while Joseph preached that his players must try to ignore the ‘noise’, he also knows that home support will make the Brave Blossoms a match for anyone.

"We will embrace it (home support) at the end of the week because it is incredibly motivational and we understand that we are representing a nation," he said.