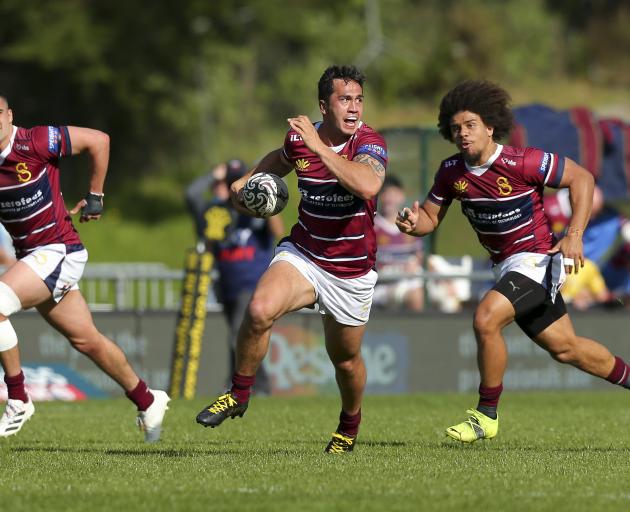 Matt Whaanga of Southland breaks away for a try against Wellington in the capital. Photo: Getty Images
Marty McKenzie was inches away from winning Southland the game.

The fullback attempted to tap a pass from Wellington opposite Aidan Morgan up to himself to catch and intercept.

Had he regathered, he was a good chance of running away to score a match-winner, the Stags already holding a 22-12 lead. But he could not quite get the ball cleanly.

Not only that, he was yellow-carded — seemingly very harshly as it was a poor pass from Morgan as much as anything — for a deliberate knockdown. It proved the decisive moment in the game.

Wellington used its numbers advantage to score twice in the final 10 minutes, Morgan crossing for the winner on fulltime to claim a 24-22 win at Porirua Park on Saturday.

The match was a non-competition one, but it it was a cruel blow for a winless Southland team that had fought well and deserved to win.

Wellington made the better start as Jackson Garden-Bachop’s boot pinned the visiting side in their own half.

The first five gave the Lions an early lead, getting on the end of an offload from hooker Tyrone Thompson and sauntering over.

From there, Southland took the ascendancy. It held the ball well and built phases in Wellington territory to put the defence under pressure.

Tighthead prop Chris Apoua went close after running off a pass from Flynn Thomas, who had broken off a lineout drive, but was denied by some steely defence.

The pressure eventually told and a brilliant run by right winger Josh Moorby, in which he fended off two defenders and beat a third, took Southland back to 7-5.

An intercept try to second five Matt Whaanga made it 12-7 not long after and Southland took that lead to halftime.

Wellington equalised straight after the break, though.

It used its pick and go to draw the defence in, before spinning wide to Wes Goosen to score in the corner.

It looked to be in again as it broke down the left wing, but the Southland defence held and then won a penalty deep in its own 22m.

Joe Walsh gave the Stags back the lead with half an hour to play, the loosehead prop crashing over from the pick and go to make it 19-12.

A penalty from McKenzie added another three to extend Southland’s lead to double digits.

From that, Wellington kicked deep into Southland territory, won the lineout and used its overlap for Pepesana Patafilo to score in the left corner.

It still trailed by five though and the Southland defence looked as if it would do enough to hold.

But Goosen spotted space in behind the line, probably where McKenzie would have been, and Morgan ran through to collect his grubber and score next to the posts on fulltime.

- Hawkes Bay will hold on to the Ranfurly Shield until at least next year.

The Magpies beat Waikato 41-14 in their final shield defence of the season in Napier on Saturday night.