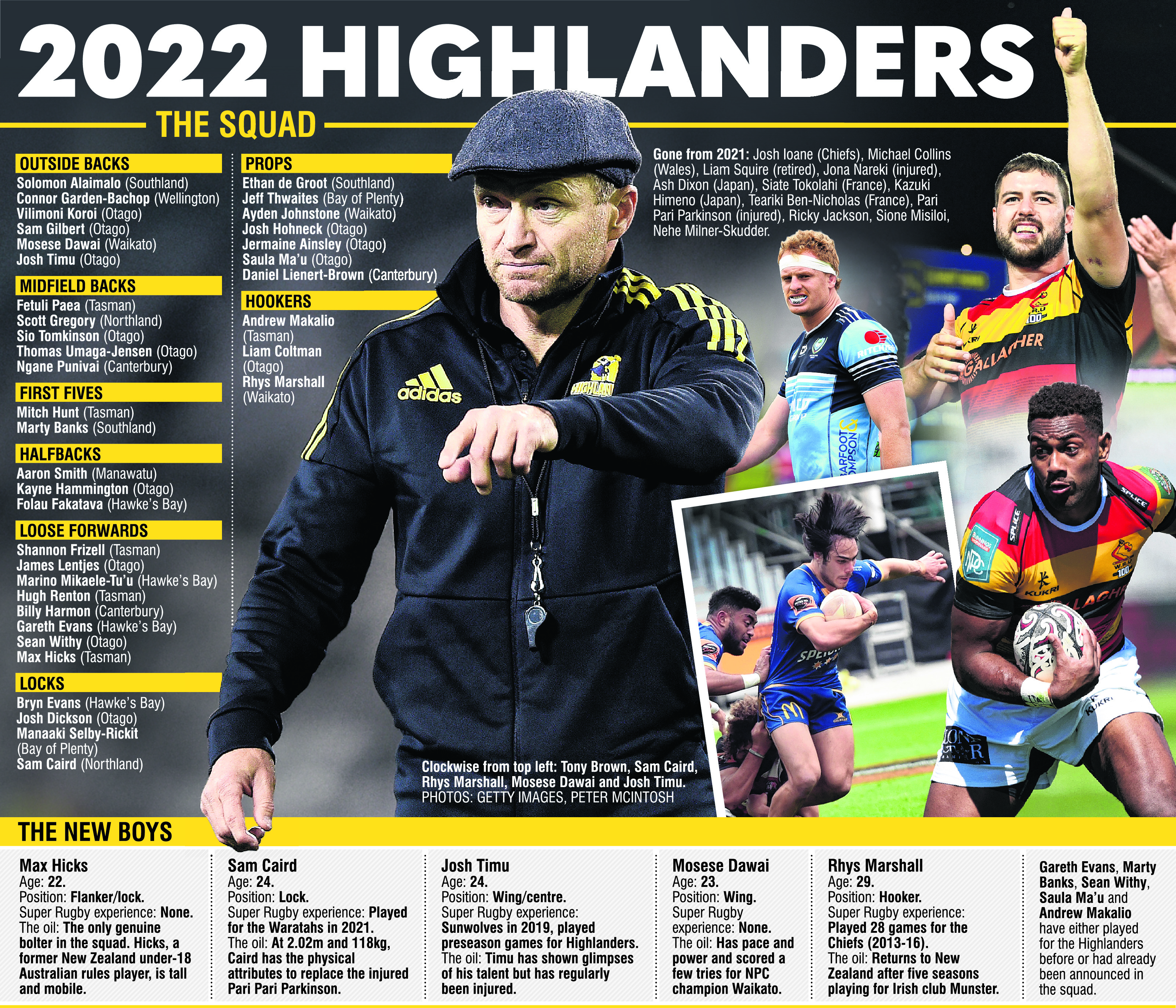 The Highlanders have had the luxury of rolling the dice on a handful of new players for the inaugural Super Rugby Pacific competition.

Most of the names in the 38-strong squad released yesterday as part of a competition-wide selection announcement were familiar, as either they were part of this year’s team or their signing had been announced.

But there were some gaps to fill, and coaches Tony Brown and Clarke Dermody have come up with an intriguing mix of newcomers to augment a reasonably stable squad.

‘‘We haven’t had a big turnover of players, which has been good, and we’ve got guys who have been around the squad for a few years now,’’ Dermody said yesterday.

‘‘Even the younger guys coming in have been around the squad through the high-performance programme.’’

That continuity means the Highlanders could have a punt or two in the player market.

The genuine bolter — so rare now the Super Rugby teams contract players directly and announce signings throughout the year — is Max Hicks.

The versatile forward, out of Rosmini College and with a bit of experience in Australian rules, only made his debut for Tasman this year, but has previously been in the Blues under-20 and Crusaders development teams.

‘‘He’s still a young player but he’s really athletic and quite dynamic on the field,’’ Dermody said.

‘‘He carries hard, he throws himself into the tackle, and he’s got great skills in the air as well. We see him covering a fair bit of lock but eventually see him as a 6.’’

There was a late scramble to find a specialist lock when Highlanders big man Pari Pari Pakinson was ruled out of the 2022 season with injury.

The Highlanders had been tracking various other players during the NPC so swooped on Northland lock Sam Caird, who played for the Waratahs this season.

‘‘He’s another big athlete who has played Super Rugby, and he’s had a good season for Northland,’’ Dermody said.

‘‘We were lucky to be able to get him quite late in the piece.’’

A solid pick-up to join the squadron of hookers is Rhys Marshall, the former Chiefs rake who returned to New Zealand this year — he was initially with North Harbour before switching to Waikato and winning the NPC Premiership — after five seasons with Irish club Munster.

Marshall and the already signed Andrew Makalio will compete with Liam Coltman and help alleviate the loss of co-captain Ash Dixon.

‘‘Having the experience of both Rhys and Andrew is going to be important for us. Both have played at a high level, and they bring different experiences into our squad, which will be crucial.’’

With Jona Nareki injured, the Highlanders needed outside back cover, and they have turned to something of a forgotten man.

Josh Timu has had a wretched run with injury — he has spent much of this year recuperating from ankle surgery — and has only really been able to dip his toe in Super Rugby, but the Otago utility is rated highly by Brown.

That means there is no place for Otago favourite Freedom Vahaakalo, who made his debut for the Highlanders as a replacement player in March.

‘‘It’s tough for Freedom, because he’s got a great skillset,’’ Dermody said.

‘‘Unfortunately, he’s just not quite in the mix of what we were after this year.

‘‘But he’s a quality player and I’m sure he’ll get picked up by someone when injuries happen.’’

Elsewhere, the Highlanders appear to have reasonable depth, especially at prop and loose forward, if they do not have bad luck with injuries.

They will be particularly hopeful Fetuli Paea and Thomas Umaga-Jensen can get an extended run in midfield after their 2021 seasons were wrecked.

Five players from within the Highlanders region will be named to development contracts, meaning the likes of Otago lock Fabian Holland and first five Cam Millar could get a chance to be around the professional squad.

If Brown and Dermody are to get this squad humming, they will have to do it quickly.

The Highlanders do not fully assemble until January 6, and their All Blacks do not filter back in until later that month, but having so many well-established players should be an advantage.

Their pre-season games are in Weston (February 4) and Queenstown (February 11) before the Super Rugby opener against the Crusaders in Christchurch on February 19.