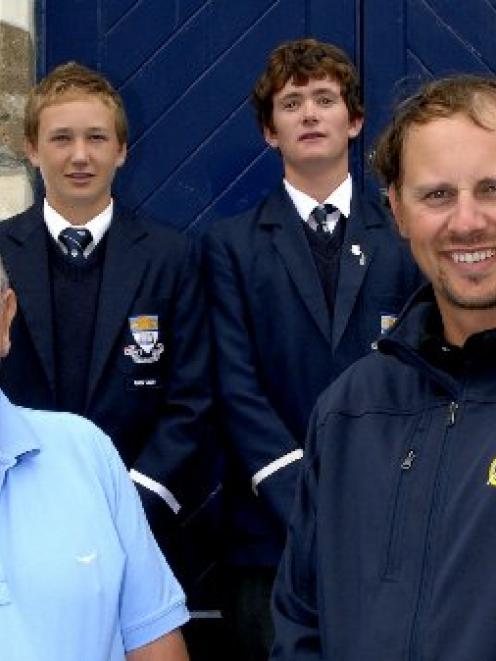 Three Otago Boys High School pupils have been invited to play in the inaugural City of Dunedin Legends Pro-Am golf tournament at Balmacewen next week. They are (rear, from left) Kayne Wardell (16), Thomas Facer (16) and Scott Mitchell (17). In front are tournament organiser Bill Medder and Sport Otago golf officer Michael Smith. Photo by Gregor Richardson.
Alex Gorrie, from Kavanagh College, had an outstanding win in the 6km road race at the recent New Zealand secondary schools championships held in Timaru.

Gorrie was the only individual from Kavanagh College, making his win even more meritorious.

As a year 12 student, Gorrie will have the chance to defend his title at the next national event.

Tradition in the making
Every two years, the Kavanagh College First XI has made a trip across the ditch for a series of games aimed at developing cricketing skills at the school.

This trips started 20 years ago and have been a highlight for aspiring Kavanagh College cricketers.

This year, the team was based at Broad Beach on the Gold Coast and played five games in Brisbane, Toowoomba and the Sunshine Coast.

Out of five games played, Kavanagh College won three, lost one on the penultimate ball of the game and was beaten by St Josephs Nudgee College, the top GPS College in greater Queensland and winner of the annual Christian Brothers tournament.

The team was well captained by Otago Under-19 players Nick Eathorne and Daniel Willemsen.

All 13 players who toured had special moments - highlighted by the 166 not out scored by Otago Under-17 representative Ben Willemsen against The Southport School, and big brother Daniel Willemsen's 133 against St Marys Toowoomba School.

Jess has accepted a teaching position in the school and will not be lost in the area of sport, where she fills the position of head of sport to work alongside Karen in the pursuit of sporting achievement at Queens.

Triathlon expands
The annual Otago-Southland secondary schools triathlon to be held in Cromwell on February 25 has been complemented by the addition of a multisport race.

This event will consist of a kayak/bike/run and will parallel the triathlon swim/bike/run event.

It is hoped the addition of the multisport race will open this form of sport to new athletes.

The triathlon has been popular and numbers have been increasing over the years.

Both events start at 1pm.

Busy term ahead
Term one is busy with scheduled sports events.

There are a number of Otago events, plus South Island and national events.

Touch starts on Tuesday afternoons at Bishopscourt and is expected to again be a popular competition.

Eight fields are used, meaning a very busy and colourful event, with teams from most Dunedin schools.

Water polo is growing in popularity and the schools competition is getting stronger, with Otago teams tasting success at South Island events last year.

With the growth in numbers comes pressure on the only available pool at Moana.

The competition is played on Fridays from 3.45pm until 8pm.

Game schedules are tight with an attempt to provide players with as much time in the water as possible.

It is hoped to get more playing time, which will allow games to be played over times more in keeping with actual playing conditions at major competitions.

The Otago schools athletics championships are scheduled for early March in Dunedin, and will be followed two weeks later by the South Island schools championships.

The co-educational Dunedin secondary school has a proud sporting history, particularly excelling in athletics, cricket, rugby, basketball and hockey during the 1970s and 1980s.

Kaikorai Valley's participation rates and on-field performances have since dropped, but moves are under way to change that.

The school is blessed with good facilities, including extensive outdoor playing fields and a redeveloped gymnasium.

A sports academy has been established, and now, two years into its operation, is starting to show promising results.

Relationships are being built within the local community.

The formation of a strong relationship with the Zingari-Richmond Rugby Club has resulted in dramatic growth in participation rates in rugby at the school.

The latest initiative is the establishment of a sports council aimed at improving both sporting participation rates and the quality of performance at KVC.

The council is engaging the expertise of staff, pupils, parents and the local community.

Key members include Garry Chronican, the chairman of the New Zealand Schools Rugby Council, Neil Mackenzie, the head of the school sports academy and a longstanding advocate for youth football in Otago, and Theresa Johnson, the school sports co-ordinator.

The initial meeting was also attended by OSSSA sports director Des Smith, who has been instrumental in helping schools throughout Otago implement sports councils.

It is hoped these initiatives will put Kaikorai Valley College on track to a bright sporting future and the school will once again feature prominently on the local and national sporting scenes.