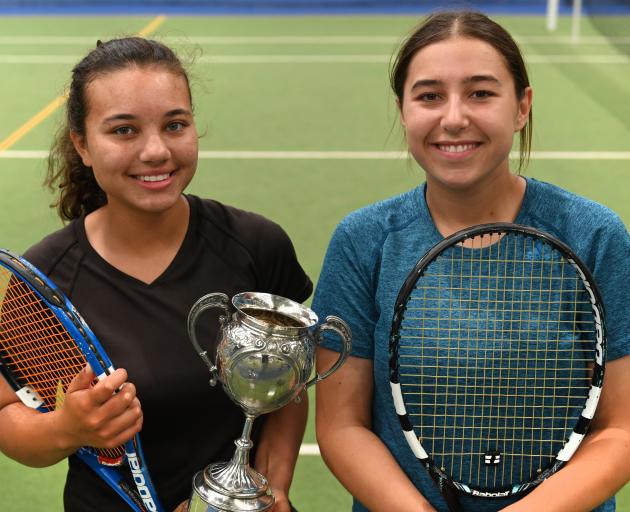 Fourth seed Hartono claimed the title after beating No1 seed Ryan Eggers (Otago) in the final.

Hartono jumped out to a quick start as he established a 5-1 first-set lead before ultimately claiming it 6-2.

There was a change in momentum in the second as Eggers raced out to a 3-0 lead but, after winning an extended game on Eggers's serve at 3-1, Hartono claimed five straight games and led 5-3.

Eggers saved a match point on serve at 3-5 and held serve, but Hartono came back from 0-30 on his own serve to wrap up the match and the championship.

In the semifinals, Hartono beat older brother and second seed Peter Hartono (Southern Lakes) 6-2, 6-2 while Eggers was forced to dig deep in the second set to hold off third seed Mitchell Sizemore (Otago) to win 6-2, 7-6 (7-5).

Horley has been on an extended winning streak of late and this continued the whole weekend as she gave up only eight games in her three matches on the way to the title.

Fields had an impressive win in the semifinal over the top seed Hikaru Han (Taranaki) as she dominated throughout to win 6-1, 6-1 but was unable to repeat that form against Horley.

Pippa Sherriff (Otago) claimed third in the women's event as she beat Han 6-2, 6-1. Horley had earlier defeated Sherriff 6-0, 6-2 in the other semifinal.

Eggers and Gavin Mockford, of Otago, teamed up to down the Hartono brothers 6-4, 6-2 in the men's doubles final.

Eggers and Mockford got off to quick start and quickly established a 4-0 lead before Hartono and Hartono won four of the next five games to trail 5-4.

Eggers and Mockford came back from 0-30 on Mockford's serve to win the first set 6-4.

Eggers and Mockford again started strongly in the second set to lead 4-1 and 6-4 6-2.

Mockford served at a high level throughout to claim his first Otago Open title.

Ahmad and Horley started strongly to win the first set 6-3, but McCutcheon and Fitzgerald won the second set 6-2.

It was left to a 10-point match tiebreak to find the champion.

McCutcheon and Fitzgerald built an 8-5 lead but Horley and Ahmad came back to win the final five points, take the match tiebreak 10-8 and claim the trophy.