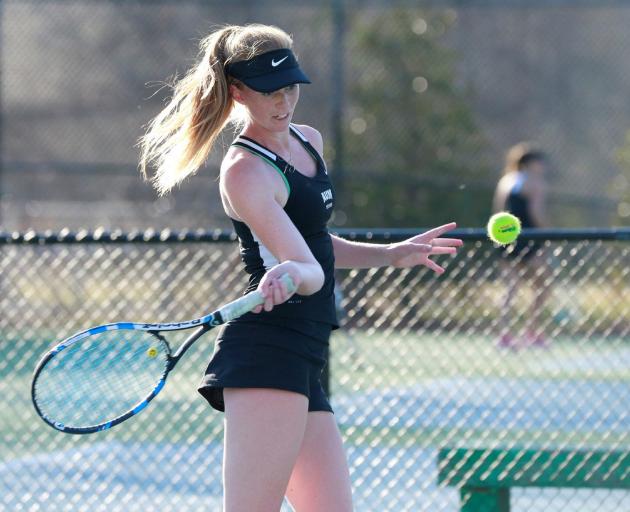 Wellington player Kelly Southwood shapes as the favourite for the Otago Indoor Open in Dunedin this weekend. PHOTO: SUPPLIED
Kelly Southwood plans on packing plenty of power into her forehand this weekend ... and definitely a puffer jacket.

The 25-year-old Wellingtonian is making the trip south to Dunedin to contest the Otago Indoor Open.

She is the highest-ranked player competing at the tournament and the No1 seed in the women's draw.

She has also teamed up with No2 seed Abby Mason in the doubles, so her first trip to the city shapes as being rather successful.

Southwood is hoping to climb the rankings and there are valuable points on offer at the Edgar Centre on Sunday when the titles are decided.

"I would really like to get into the top five in New Zealand," Southwood said.

"That is my goal for the end of the year and then play the New Zealand Champs and hopefully that goes well.

"And next year I want to take quite a bit more time off and go and play ITF futures tournaments. I may as well do it while I can."

The New Zealand No15-ranked player will not have it all her own way in Dunedin. The last time Southwood played Mason she "got there in the end in the third set".

The pair actually play for the same club in Wellington. Mason travels from Christchurch to compete.

Southwood, who grew up in Wellington, attended Auburn University at Montgomery in Alabama on a tennis scholarship and graduated in 2017 with a degree in business marketing.

She has put her studies to good use as a consultant at an accountancy firm in the capital.

"They have been really great. While I have been working here I've still been playing tournaments, mostly in Australia and here in New Zealand.

"They've allowed me flexible working hours ... and I get to take extra leave just to go and do that."

Southwood trains six days a week and often commutes to Auckland to get quality games.

She competed in the Queensland Open and the Shaw Park Open in Brisbane last month and made the top 16 in both tournaments.

"It was really good tennis. There were players like Sara Tomic ... and the level was incredible.

That is a much larger field than Southwood will face in Dunedin. There are just 14 competitors contesting the women's singles title.

Southwood will arrive in the South armed with more than a heavy first serve and a reliable forehand.

She has heard the temperature inside the Edgar Centre is not always warm enough to liberate moisture from one's brow.

"Apparently it is like a freezer inside there, so I will be bringing my puffer jacket."