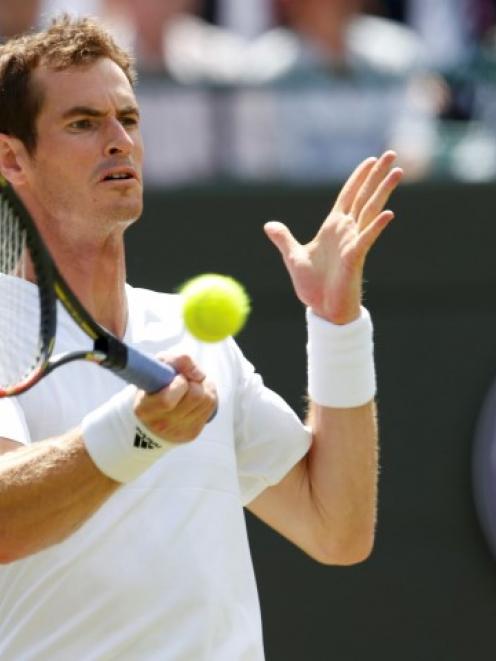 Andy Murray hits a return to Blaz Rola. REUTERS/Suzanne Plunkett
The Champagne cork that popped before the second point of Andy Murray's thrashing of Blaz Rola may have been a little premature, but the defending Wimbledon champion has already thrown down the gauntlet to his rivals.

The home favourite's 6-1 6-1 6-0 second-round victory was his 15th consecutive win at the All England Club since his tear-jerking defeat by Roger Federer in the 2012 final - and probably the easiest.

Rola rolled over and far more stubborn foe await Murray as he seeks to retain the title he won in memorable fashion a year ago against Novak Djokovic, starting with Spain's Roberto Bautista Agut in the third round.

Bulgarian 11th Grigor Dimitrov is lurking in the top half of the draw and, like Murray, has also won his first six sets. A confident 6-3 6-2 6-4 defeat of Australian upstart Luke Saville put him in the third round here for the first time.

A year after a day of mayhem that saw seeds stumble and fall in all directions on what became known as Wipeout Wednesday, it proved a less dramatic third day this time.

But there were still plenty of upsets.

In the women's draw, eighth seed and former world No.1 Victoria Azarenka, just back from a foot injury, was knocked out by Serbia's Bojana Jovanovski.

A match full of sound-effects from two of the noisiest players on the women's tour seemed to have swung Azarenka's way when she levelled after a slow start, but then slipped to 6-3 3-6 7-5 defeat.

Another to perish was 12th seed Ernests Gulbis, whose hopes of making an impact similar to his semi-final run at Roland Garros, ended in a 6-4 6-3 7-6(5) defeat to Sergiy Stakhovsky, the Ukrainian who played seven-time champion Roger Federer off the court at the same stage last year.

"Nothing was working from my side," Gulbis told reporters. "Two of my biggest weapons, my serve and return, weren't there."

Five-time champion Venus Williams moved on serenely, however, reaching the third round of a major for the first time in 18 months by beating Japan's Kurumi Nara 7-6(4) 6-1.

Illness and injuries have robbed Williams of some of her powers in recent years, but the 30th seed is determined to keep her sister, world No.1 Serena, company in the singles this year.

"I guess I haven't held up my end of the bargain," the 34-year-old, who missed last year's tournament and exited in the first round in 2012, said of her struggles. "I tried. I just haven't had the luck I've wanted."

She will face 2011 champion Petra Kvitova next after the powerful Czech hurried past Germany's Mona Barthel 6-2 6-0.

Murray's early defeat at the warm-up tournament at nearby Queen's Club raised a few doubts over his form coming into Wimbledon, but those were cast aside in les than an hour and a half.

The 27-year-old treated fans on Court One to some delightful shot-making, whether a backhand pummelled on the line, a delicate lob or the grass-hugging slices that have driven far better opponents than Rola to distraction.

Former U.S. college student Rola, playing his maiden Wimbledon and against a top-20 player for the first time, had the temerity to earn a break point in each of the first two sets. Both times Murray responded with a booming ace.

Murray, who endured some rollercoaster rides during his run to the French Open semi-finals, was clearly in no mood to work any overtime as he accelerated to victory.

"Getting games finished quickly helps," he said after coming off court.

"I feel like that cost me a little bit at the French Open - not that I would necessarily have beaten Rafa (Nadal), but I played a lot of sets and in a lot of those sets, I was up."

The sixth seed's reward is another tough match-up in the third round, this time against Croatian Marin Cilic.