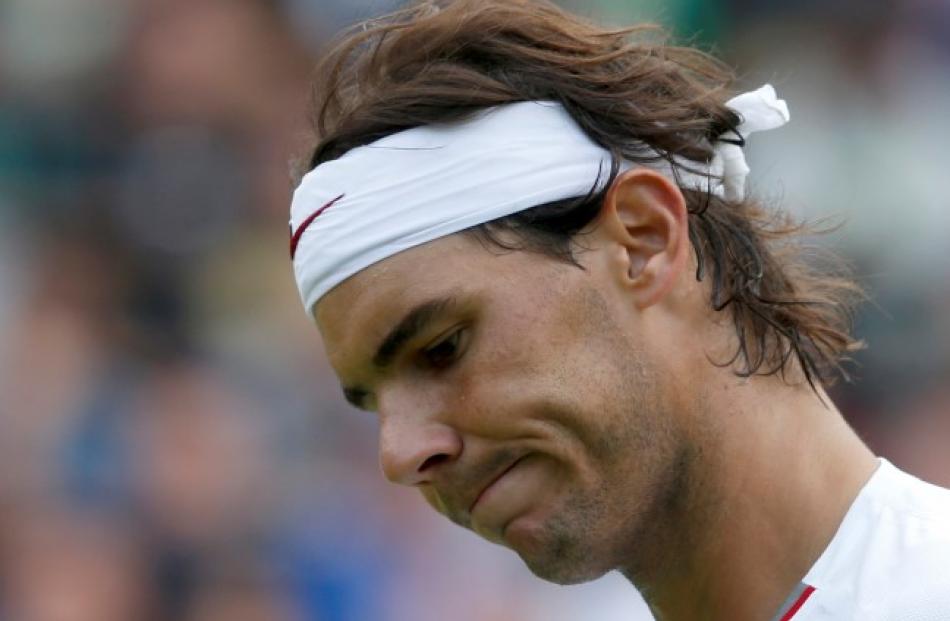 Rafael Nadal of Spain reacts during his men's singles match against Steve Darcis of Belgium at the Wimbledon Tennis Championships in London. REUTERS/Eddie Keogh 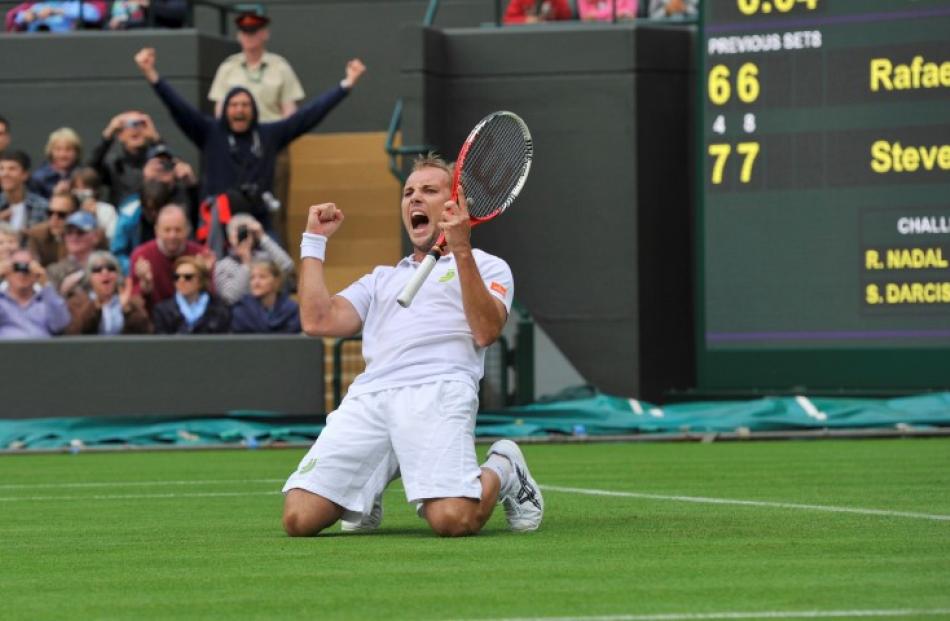 From a green and pleasant land, Wimbledon's grasscourts must now resemble a minefield for Rafa Nadal, who, for the second year in a row, suffered a shock defeat by a modest opponent playing the match of his life.

A year after Czech Lukas Rosol ambushed the 12-time grand slam champion in the second round, Nadal came up against inspired Belgian Steve Darcis in the first and was soundly beaten 7-6(4) 7-6(8) 6-4.

At least against Rosol twice former champion Nadal went down fighting in five sets, but world No 135 Darcis subdued arguably the sport's most ferocious competitor in routine fashion.

The 29-year-old from Liege, nicknamed The Shark, nailed an ace to send Nadal heading home to Mallorca with a first grand slam opening round defeat against his name.

Defeat for fifth seed Nadal was a blow for the tournament but a huge fillip for defending champion Roger Federer, whose chances of an eighth Wimbledon title had receded when drawn in the same quarter of the draw as his old sparring partner.

Federer, opening proceedings on Centre Court for the eighth time in his glittering career, had not lost in the first round of a major since the 2003 French Open, and was never in any danger as he thumped Romania's Victor Hanescu in 68 minutes.

The 31-year-old Swiss thoroughbred, rated as a pre-tournament 9-1 title shot by several bookmakers, produced a display of brutal beauty to win 6-3 6-2 6-0.

Nadal's subsequent defeat then saw the odds on an eighth Federer title here slashed in half.

British hopes of a first men's winner here since 1936 also soared on the back of Nadal's exit as second seed Andy Murray posted a 6-4 6-3 6-2 victory against Germany's Benjamin Becker.

It was a bad day all round for fifth seeds with Italy's Sara Errani falling in straight sets to Puerto Rico's Monica Puig.

Women's second seed Victoria Azarenka survived a major fright when she fell awkwardly and needed lengthy treatment on her right knee before hobbling to 6-1 6-2 victory over Portugal's Maria Joao Koehler.

Third seed Maria Sharapova, let her tennis do the talking as she put aside a verbal spat with world No 1 Serena Williams to beat Frenchwoman Kristina Mladenovic 7-6(5) 6-3.

For the second year running Nadal's defeat left a huge hole in the men's draw and raised inevitable questions about the state of the 27-year-old's knees.

After defeat by Rosol last year he was sidelined for seven months before returning in February this year.

His comeback has been nothing short of spectacular with seven titles in nine tournaments, including this month at the French Open where he became the first man to win a single grand slam tournament eight times.

However, he failed to play a grasscourt warm-up event after withdrawing from Halle and it showed as he looked way short of his best against Darcis who seized his chance in ruthless.

"At the end it's not a tragedy. That is sport," Nadal told reporters, refusing to discuss his physical wellbeing.

"The only thing that I can say today is congratulate Steve Darcis. He played a fantastic match."

Darcis turned professional two years after Nadal and, while the Spaniard's career has been spent in the stratosphere, he has inhabited a level more in keeping with Belgium's lowlands.

Proving just how deep the talent pool is in the men's game, however, he played three incredible sets of risk-taking tennis to scale the heights on Centre Court.

He did beat Tomas Berdych at the Olympics last year, on the same court, but topped that display against Nadal to record only his second win against a top-10 player.

Darcis, who has a shark tattoo on his arm, said his first reaction on seeing the draw was "Shit" but there was no hint of inferiority as he outplayed the 2008 and 2010 champion.

"Maybe he (Nadal) didn't play his best match. But I have to be proud of me, I think," said Darcis. "I played a great match and I fought from the beginning till the end, and I played unbelievable tennis."

Federer's first entrance on Centre Court has become a fixture of the British summer since he made his debut at the tournament 15 years ago - since when he has won 17 majors.

Under grey skies, Federer sauntered regally on to his favourite stage in an immaculate white jacket garnished with the tiniest flash of orange piping to match the soles of his shoes.

Hanescu, equal only to 31-year-old Federer in age, was simply dazzled, losing the first set in 24 minutes and the last in 17 as Federer, keen to conserve energy for the challenges ahead, raced to his 122nd grasscourt victory.

"I pack my bags anyway for five sets every single time," Federer, who could have travelled light for this one, told reporters after his consummate display.

Murray's no-nonsense victory over Becker was the only home success with the other six British players in action all losing.

As the light faded, former champion Lleyton Hewitt showed the fire in his belly burns as bright as ever when he took out 11th seed Stanislas Wawrinka in straight sets to give a boost to Australian spirits after a week of cricket and rugby woes.

"It's good that I can put on some sort of show that they can get pretty pumped up out there," Hewitt said.