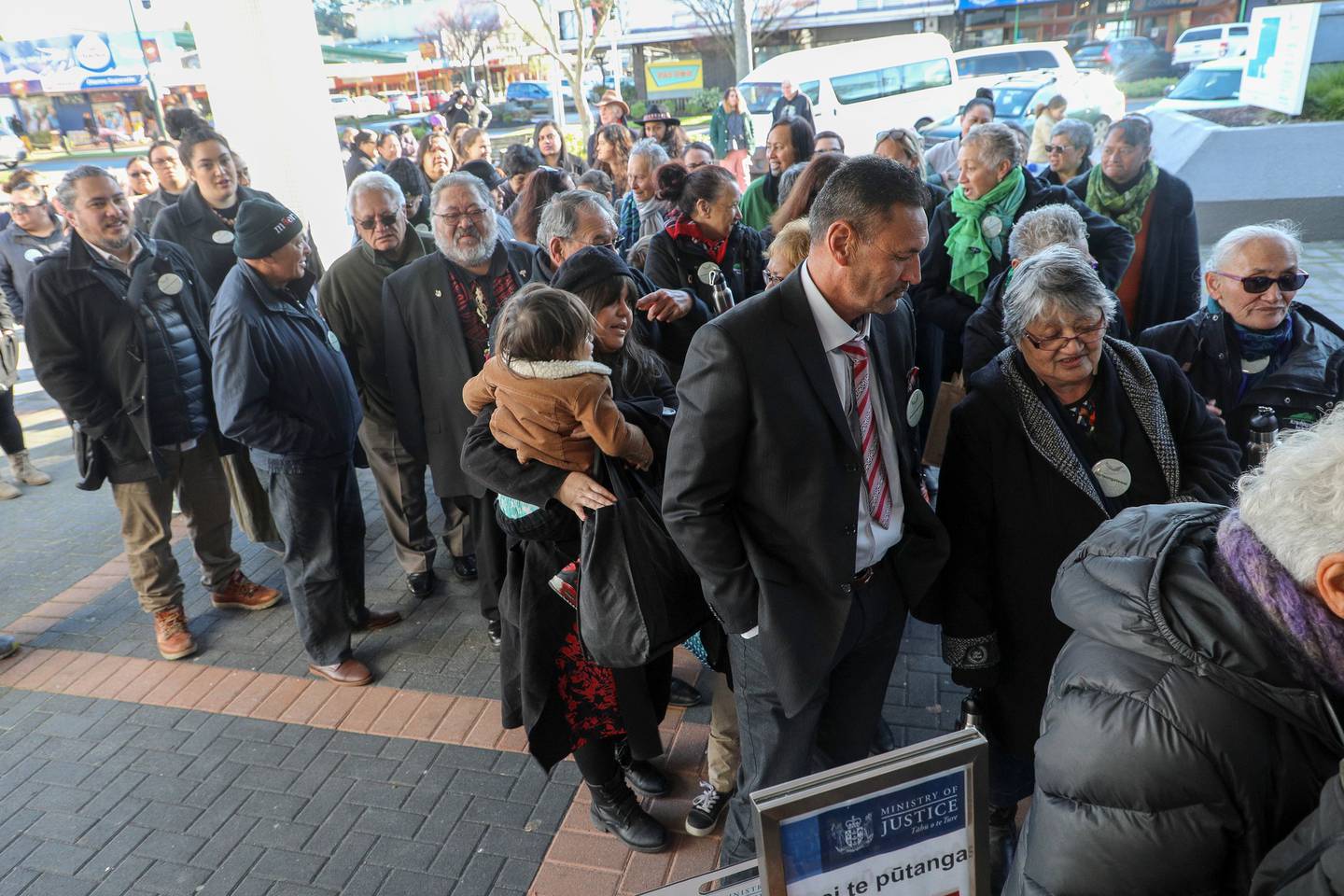 More than 100 Ngāti Awa whānau have gathered in Rotorua as the iwi continues its fight against the expansion of the bottling plant. Photo: Andrew Warner
The lawyer for a water bottling giant seeking permission to expand was heckled by the public gallery in the Rotorua High Court yesterday.

More than 100 Ngāti Awa whānau, alongside Ngāi Te Rangi, Ngāti Pikiao and Sustainable Otakiri, have gathered in Rotorua to fight the expansion of the bottling plant.

The Environment Court last year dismissed the group's appeals against the resource consents granted by Bay of Plenty Regional Council and Whakatane District Council as it felt it did not have jurisdiction over the "end use" of the water.

This includes the consumption of the water and environmental effects of plastic waste.

Instead, the court said it could only consider the actual taking of the water.

Yesterday was the second day of a planned four-day hearing in the High Court.

Randal opened proceedings by speaking about the political nature of water bottling, saying that opposition to Creswell persisted "despite its best efforts".

He said the expansion would provide employment in a region that needed it, and noted a Ngāti Awa kaumātua had given evidence in the Environment Court that the water take would have no impact on te mauri o te wai - the spiritual essence of the water.

Randal's speech was peppered with cries of "greed", "we don't want your jobs", "how would you know, you're not Māori", "get your own water", as well as groans and incredulous laughter.

"Creswell acknowledges the right for iwi to take any position they like, but political views do not carry weight in this forum," Randal said.

"In fact, te runanga expressed interest in buying the plant itself. It also has interests in dairy and fisheries that involve plastic packaging."

He said Ngāti Awa did not explicitly bring forward its concerns about plastic bottles to the Environment Court; it was only noted in passing by a neighbour of the plant.

If the issue was not properly raised in the first instance, it could not be used in an appeal.

"Plastic effects on the environment are not inevitable. Recycling happens. If a bottle is recycled, if packaging is recycled, there is no effect," he said.

Counsel for the regional council Mary Hill said the Environment Court correctly understood that the Resource Management Act and the Regional Plan did not control export or regulate and control plastic recycling, which were regulated by other legislation. Plastic was not managed by the regional council but by district councils.

"This is different to whether the court can regulate the effects of that which it does control," she said.

"Selling water is a cultural effect, which can be assessed under the RMA framework, and the court did this thoroughly in this case.

"Kaitiakitanga is a unique relationship experienced by tangata whenua in New Zealand and there was considerable analysis of this relationship in the Environment Court's decision."

Hill said councils were required to engage with iwi and pay mind to Treaty of Waitangi principles when making decisions.

"It's not disputed the court can take into account metaphysical concepts and has done so, but that is quite a different proposition to saying the Environment Court should have taken into account a belief in ownership as a Treaty principle."

She said the court did provide "practical expression" to kaitiakitanga through the establishment of a kaitiaki liaison group, which could see the regional council review consents if it made a recommendation.

The submission that the court "wrongly" considered the testimony of one kaumātua over another was "hard to follow".

"The court looked at their expertise in tikanga as kaumātua of Ngāti Awa, which they all were ... they were weighing the experts' subject matter the same way they would weigh any other."

Hill said it was not as simple as preferring one witness over the other, instead she said the Environment Court evaluated the witnesses carefully and gave "careful" reasoning as to why it went with one view over the other.

"Rangatiratanga goes to the core of Treaty principles as does the relationship of iwi with their water."

He said Ngāti Awa was the only iwi to have been mentioned with regard to Māori rights and this exclusion of Ngāti Pikiao trampled on its Treaty rights.

In his rebuttal for Ngāi Te Rangi, Jason Pou said end use of water was "squarely" within the Regional Policy use, particularly wasteful or inappropriate use.

"How do you determine inappropriate use if you do not look at what the end use is?"

He said just because water was taken in the same way from other sources it did not necessarily make the water take from Otakiri appropriate.

"This is about the mana of an iwi to exercise rangatiratanga and kaitiakitanga over a water body. This is why Ngāi Te Rangi come to support Ngāti Awa."

Pou said under cross-examination the tikanga expert for Creswell admitted he had "divorced" himself from the Ngāti Awa elders' institution.

"The mandate within the iwi is clear. It rests with the iwi authority," he said.

Groundswell of support
Ngati Awa's High Court appeal has turned into a movement for rangatiratanga with thousands across the country voicing their support for the iwi.

The movement has largely been driven through social media with Facebook pages, Instagram influencers and online petitions reaching the masses.

The iwi has actively encouraged its whānau to attend the hearings in Rotorua. About 100 people of all ages have made the trip from Whakatāne.

The court's gallery has been too full to accommodate everyone and others have gathered at the Māori Land Court on Haupapa St to watch the proceedings via livestream.

A petition on ActionStation created by Lanae Cable has received well over 18,000 signatures and was shared by Instagram influencer "Māori Mermaid". Cable said she wanted to show Ngāti Awa how many people around New Zealand supported its cause.

She isn't sure if the petition can stop the expansion of Otakiri Springs but wants to tautoko Ngāti Awa by any means.

Bay of Plenty regional councillor Toi Iti has also been at the hearing and said he absolutely supported Ngati Awa's right to appeal.