0 Comments
A viral video of a man clutching a protected bird in a Dunedin street has upset the Department of Conservation.

The video has been viewed more than 30 million times and has gained its creator more than 150,000 followers on TikTok after it was posted on Sunday.

The short clip showed a swarm of gulls circling overhead eager for a shot at the man’s food. 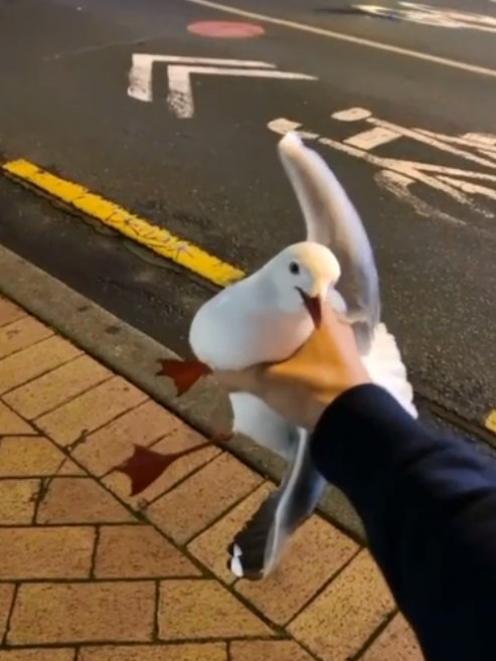 A red-billed chip thief caught mid-flight and shared across the world. PHOTO: SUPPLIED
The camera pans to a bird caught in his right hand, which he throws into the air away from him.

The video was taken by Taylor Mechen in George St.

Mr Mechen said in a follow-up video that capturing the bird was an accident.

"They all started kind of dive-bombing me trying to get my chips. One started coming towards my head so I ducked and put my hand up. I just grabbed it."

He said he was shocked by the situation and pulled out his phone.

Mr Mechen told the Otago Daily Times that he did not hurt the bird, and made sure it flew away safely.

The red-billed gull is protected and a colony at Taiaroa Head, near Dunedin, is the only one in New Zealand not declining.

Doc Otago operations manager Annie Wallace said it was disappointed by the video.

"Tarapunga are protected under the Wildlife Act, meaning it is illegal to disturb, harass or kill them. Those who do so can face fines or imprisonment."

People who have seen the video should not try to replicate it.

"It is stressful for the animal whenever someone catches and holds our native birds like this."

She said people should not feed the seagulls or encourage the birds to interact with them.

"Our birds did not evolve eating human food. They are not used to it and it can make them sick."